Roots: The Saga of an American Family (MP3 CD) 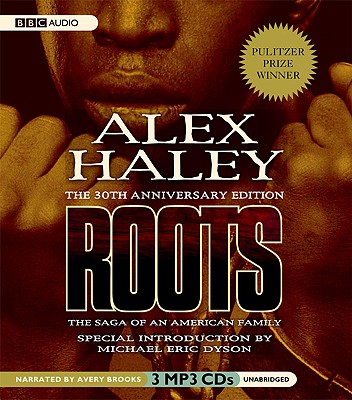 By Alex Haley, Avery Brooks (Narrated by), Michael Eric Dyson (Introduction by)
$39.95
Backordered. Place an order and we will let you know when to expect your book.

It begins with a birth in an African village in 1750, and ends two centuries later at a funeral in Arkansas. And in that time span, an unforgettable cast of men, women, and children come to life, many of them based on the people from Alex Haley's own family tree.When Alex was a boy growing up in Tennessee, his grandmother used to tell him stories about their family, stories that went way back to a man she called "the African" who was taken aboard a slave ship bound for Colonial America. As an adult, Alex spent twelve years searching for documentation that might authenticate what his grandmother had told him. In an astonishing feat of genealogical detective work, he discovered the name of "the African"--Kunta Kinte--as well as the exact location of the village in West Africa from where he was abducted in 1767. Roots is based on the facts of his ancestry, and the six generations of people--slaves and freemen, farmers and lawyers, an architect, a teacher--and one acclaimed author--who descended from Kunta Kinte.