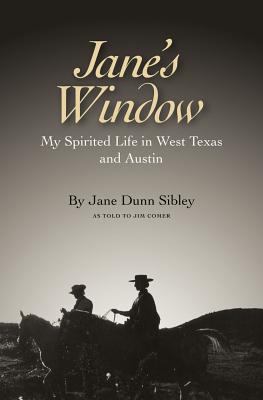 By Jane Dunn Sibley, Jim Comer (With), T. R. Fehrenbach (Foreword by), James L. Haley (Introduction by)
This item is not available for sale on this site.

On the southern portion of what was known as the Sibley’s Pezuna del Caballo (Horse’s Hoof) Ranch in West Texas’ Culberson County are two mountains that nearly meet, forming a gap that frames a salt flat where Indians and later, pioneers came to gather salt to preserve foodstuffs. According to the US Geological Survey, the gap that provides this breathtaking and historic view is named “Jane’s Window.”

In Jane’s Window: My Spirited Life in West Texas and Austin, Jane Dunn Sibley, the inimitable namesake of that mountain gap, gives readers a similarly enchanting view: she tells the story of a small-town West Texas girl coming into her own in Texas’ capital city, where her commitment to philanthropy and the arts and her flair for fashion—epitomized by her signature buzzard feather—have made her name a society staple.

Growing up during the Depression in Fort Stockton, Jane Sibley learned first-hand the value of hard work and determination. In what she describes as “a more innocent age,” she experienced the “pleasant life” of a rural community with good schools, friends and neighbors, and daily dips in the Comanche Springs swimming pool. She arrived as a student at the University of Texas only ninety days before the bombing of Pearl Harbor and studied art under such luminaries as sculptor Charles Umlauf. Her enchanting stories of returning to Fort Stockton, working in the oil industry, marrying local doctor D. J. Sibley, and rearing a family evoke both her love for her origins and her clear-eyed aspirations.

The Sibleys never discussed the details of their good fortune, and, to their gratitude, no one ever asked. In Jane’s Window, Sibley narrates travel adventures, shares vignettes of famous visitors, and tells of her favorite causes, among which the Austin Symphony and the preservation of lower Pecos prehistoric rock art are especially prominent.

Peopled with vivid characters and told in Sibley’s uniquely down-to-earth and humorous manner, Jane’s Window paints a portrait of a life filled to the brim with events both heartwarming and heartbreaking.

JANE DUNN SIBLEY served as president of the Austin Symphony for a quarter of a century. An active philanthropist, she has championed various causes and organizations benefitting the arts, culture, and history.
JIM COMER is also the author of When Roles Reverse: A Guide to Parenting Your Parents, which was a finalist for the Texas Writers’ League Best Non-Fiction Book of 2007.

“Jane Sibley is indeed like no other. Nor is this memoir. . . .”—from the foreword by T. R. Fehrenbach

“If the goal was to tell a good story about a fascinating woman who saw things that needed doing, believed in getting things done and then set out to do them, facing the tragedies that life often brings and overcoming them, then this memoir achieves that.”—Frances Brannen Vick, coauthor of Letters to Alice: Birth of the Kleberg-King Ranch Dynasty

"If the goal was to tell a good story about a fascinating woman who saw things that needed doing, believed in getting things done and then set out to do them, facing the tragedies that life often brings and overcoming them, then this memoir achieves that."--Frances Brannen Vick, co-author, Letters to Alice: Birth of the Kleberg-King Ranch Dynasty
— Frances Brannen Vick

“Jane, I really enjoyed your book and am proud to endorse it. When I bought the Alpine Ranch, Ted Gray had leased it for many years. While the story's not broadly known, Ted told me the tale of the Henderson killings. My foreman, Chappo, lives in the house and I plan to look for those bullet holes on my next visit.”—Clayton W. Williams, Jr.
— Clayton W. Williams, Jr.

“I have known Jane Sibley and her family for several years, and they are all true Texans. She is a beautiful Texas lady, and I know everything she says in her book is true Texacana.”—Joaquin Jackson, retired Texas Ranger
— Joaquin Jackson

“Jane Sibley is a straight shooter who rarely misses her mark and has no shortage of targets.  Jane’s Window is a lesson from the 'greatest generation' to us Baby Boomers, Gen X-ers and Y-ers.  No one is going to solve our problems for us, so grab your boot straps and get the job done.  Build a water ballet on the West Texas frontier, a symphony orchestra among lobbyists and politicians, a concert hall in a capital 'keeping it weird.'  Hers has been a life of civilizing influence.  But don’t underestimate her refinement: best not to trifle with gals who carry rifles.”--Douglas Dempster, Dean of the College of Fine Arts, University of Texas at Austin
— Mr. Douglas Dempster

“Preservationists across the United States have worked tirelessly to protect and preserve historical artifacts of local and national significance.  These protectors brought about an awareness of the threat of losing the significant remnants of our past, and through their efforts the Preservation Act of 1966 was adopted to coordinate the protection of these precious historical sites.  Jane Dunn Sibley, working in concert with her late husband D. J. Sibley, is one of those preservation warriors.  This book is not just a reminiscence of one person's passion; it is a testament of accomplishment that follows dedicated purpose and organization.  It should be a guide to young warriors as they continue the work that has gone before them and that is so essential to guarantee the remembrance of our past and the purpose of our future.”--M. Wayne Bell, Professor Emeritus, University of Texas
— M. Wayne Bell

“Jane Sibley is one of the unique characters and personalities that enriches the lives of Texans. Her intense dedication to family as well as to the arts and history of her adopted city, Austin, and of Texas in general is a gift to all citizens. For years she chaired the board of the Austin Symphony Orchestra; one of the most successful symphony orchestras in the country. She is a true treasure of Texas.”--Allan "Bud" Shivers Jr., Austin businessman
— Allan "Bud" Shivers, Jr.

“Jane's Window is as vibrant, artistic, and eloquent as the author herself.  Dear, sweet Jane, and her late husband D.J., have created an incredible legacy of service, and leave an indelible, positive impression on Austin and Texas.  Jane’s trademark feather in her hair, to me, represents the soaring of her passions and dreams, which are grounded in a great heart, and the good will to help her fellow Texans.”—Lt. Gov. David Dewhurst
— David Dewhurst

“Jane Sibley has the force of a Texas tornado and the determination of some earthly power greater than that.  For decades this soft-spoken but tenacious guardian of the arts in Texas has used her superhuman talents to support all that is good in cultural pursuits in Austin and environs.  Hers is a story that mirrors the growth not only of the State but of the forces that move its people to appreciate great music, art, literature, and architecture. The story of such a rich life needs be told, and now finally Ms. Sibley’s has arrived.  Seeing the world through her eyes is a unique and rewarding experience.”—Peter Bay, Music Director, Austin Symphony Orchestra
— Peter Bay

“Jane Sibley chronicles her wonderful journey through a life of loving relationships, artistic appreciation, and managerial accomplishments, shared with her husband D.J. Sibley.  It is the highly readable account of a talented, wise, and stalwart person, filled with wit and happiness.”—Hans Mark, Professor of Aerospace Engineering, University of Texas, Austin, and Bun Mark, professor and educator
— Hans and Bun Mark

“Jane Sibley was raised in a small town surrounded by large mesas, a giant spring to swim in and a recently abandoned cavalry fort. World War II brought sweeping changes to Fort Stockton. A U.S. Army airfield was built just west of town to provide training for recruits from around America. Fort Stockton opened their hearts and their homes to these men. Some of Jane's friends married these recruits. During the war years at the University of Texas Jane found her love of art and completed her degree. Jane became a doctor’s wife when D. J. Sibley returned from the war. Thus began their joint endeavor to preserve Texas history and expand the arts. Jane is a great lady. She has written a wonderful book. You will enjoy reading the stories again and again.”–Janet Williams Pollard, author, Harsh Country, Hard Times: Clayton Wheat Williams and the Transformation of the Trans-Pecos
— Janet Williams Pollard

"The Sibleys were practiced philanthropists, known for their support of the arts, education, history, and the physical sciences, when they were suddenly confronted by threats to West Texas’ little-known treasures of Native American art and archeology.  When Mexico and the U.S. solidified plans to impound Amistad Reservoir on the Rio Grande, they opened access to hundreds of dry caves and scores of ancient Native American cave paintings that had previously been oscured by anonymity.  This double threat to beloved West Texas and to the little-known art treasures hidden in its canyons brought Jane Sibley to the forefront of the then-unorganized and underfunded movement to document and preserve as many sites as possible.  She and a few dedicated friends lobbied the state of Texas to create a rock art preserve that contained examples of the wide range of pictographs painted between four thousand years ago and the time of contact.  The result is Seminole Canyon State Historic Park where the Sibleys contributed to the physical protection to sites made accessible by boat to vandals and relic hunters.  In 1989, in concert with the Witte Museum and the University of Texas, Jane Sibley lent her organizational talents to the planning and implementation of an international conference that raised the consciousness of local and international experts, bringing the rock art of Texas to the world-wide stage.  From this nucleus, she drew like-minded citizens who banded together to form the Rock Art Foundation, a non-profit organization dedicated to research, education, and preservation of the ancient art.  She remains an active member of the board of directors as the RAF continues to seek ways to fulfill its mission.  She and I have worked together for a quarter of a century and she remains in the vanguard of the active preservationist movement, ready to counteract threats to our natural and cultural heritage."--Solveig Turpin, anthropologist and archeologist specializing in prehistoric rock art
— Dr. Solveig Turpin

“Jane’s Window, from the Depression years in Pecos County to contemporary Austin, is a fascinating story, rich with Texas history, arts history, and an admirable life by one who has no equal.” —Southwestern Historical Quarterly
— Gary A. Keith