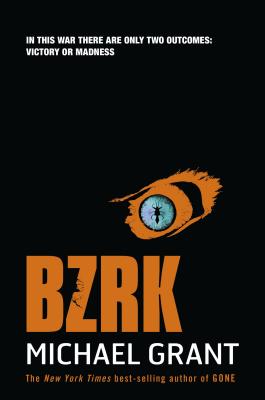 By Michael Grant
$17.99
Backordered. Place an order and we will let you know when to expect your book.

Love The Hunger Games? Action-adventure thrillers with a dystopian twist? BZRK (Berserk) by Michael Grant, New York Times best-selling author of the GONE series, ramps up the action and suspense to a whole new level of excitement.

Charles and Benjamin Armstrong, conjoined twins and owners of the Armstrong Fancy Gifts Corporation, have a goal: to turn the world into their vision of utopia. No wars, no conflict, no hunger. And no free will. Opposing them is a guerrilla group of teens, code name BZRK, who are fighting to protect the right to be messed up, to be human. This is no ordinary war, though. Weapons are deployed on the nano-level. The battleground is the human brain. And there are no stalemates here: It's victory . . . or madness.

BZRK unfolds with hurricane force around core themes of conspiracy and mystery, insanity and changing realities, engagement and empowerment, and the larger impact of personal choice. Which side would you choose? How far would you go to win?

Michael Grant has spent much of his life on the move. Raised in a military family in the USA, he attended ten schools in five states, as well as three schools in France. Even as an adult he kept moving, and in fact he became a writer in part because it was one of the few jobs that wouldn t tie him down. His dream is to spend a whole year circumnavigating the globe and visiting every continent. He lives in Marin County, California, with his wife, Katherine Applegate, their two children, and far too many pets. You can visit him online at www.themichaelgrant.com."

* Grant, who showed a flair for grandiose conceptual gambits in his Gone series, here goes big by going small. With science as soft as pudding (though, really, who cares—pudding is delicious), he envisions nanotechnology so advanced that brains can be rewired, memories manipulated, and senses hacked by robots and gene-spliced creatures the size of dust mites. A war between two ultra-secretive, competing ideologies—one championing free will, the other promising enforced happiness—is being fought “down in the meat,” and Grant gleefully exposes the biological ickiness of the body going about its everyday business in paranoia-inducing scenes of nanobots scuttling across spongy brain matter or plunging probes into optic nerves. At the same time, he doles out eviscerating loads of violence on the macro level as two teens are enlisted to help stop a maniacal baddie and his team of “twitchers,” who are planning to infiltrate the heads of the world’s most powerful nations. With simmering pots of sexual tension, near-nonstop action, and the threat of howling madness or brain-melting doom around every corpuscular corner, Grant’s new series is off to a breathless, bombastic start. - Booklist, Starred Review

“YA fiction at it’s best. … It's a combination science fiction/adventure/thriller all written brilliantly to entice the reader into a terrifying world.” –Examiner.com

“Squeamish as I am, Grant has me hooked with the compelling characters that populate the Go BZRK storyworld.” –Michael Anderson, WIRED magazine

“Grant utilizes contemporary themes and memorable characters, along with the possibilities of emerging technology to craft aningenious world not too far removed from our own. … The intelligent presentation will likely appeal to a broad audience.” –PopCultureGuy

“If you are anything like me then BZRK will blow your mind. … BZRK is very different from pretty much any YA book out there at the moment, and the closest I can come to expressing how it is continuing to play on my mind almost two weeks later, is to liken it to William Gibson's Neuromancer which had a similar effect on me many years ago. BZRK is a gamechanger for YA literature.” –The Book Zone

“This novel is full of the intricacies of the human body and non-stop action on all fronts. … An intricately written science fiction thriller, BZRK offers an in-depthlook into a war raging deep within the human body.” –Deseret News

Praise for Gone, by Michael Grant:

An ALA Popular Paperback for Young Adults

"This intense, marvelously plotted, paced, and characterized story will immediately garner comparisons to Lord of the Flies...A potent mix of action and thoughtfulness-centered around good and evil, courage and cowardice-renders this a tour-de-force that will leave readers dazed, disturbed, and utterly breathless." - Booklist

"If Stephen King had written LORD OF THE FLIES, it might have been a little like this...Excited to see where [Grant] will take [the reader] with this new series." - Voya