The End Of The Fucking World (Hardcover) 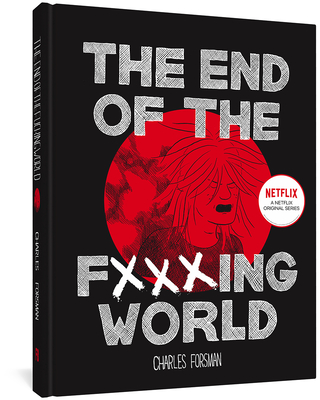 A darkly comedic graphic novel about two teens on a twisted road trip, recently adapted into a hit Netflix series.

Charles Forsman’s hit graphic novel follows James and Alyssa, two teenagers living a seemingly typical teen experience as they face the fear of coming adulthood. Forsman tells their story through each character’s perspective, jumping between points of view with each chapter. But quickly, this somewhat familiar teenage experience takes a more nihilistic turn as James’s character exhibits a rapidly forming sociopathy that threatens both of their futures. He harbors violent fantasies and begins to act on them, while Alyssa remains as willfully ignorant for as long as she can, blinded by young love.

Charles Forsman's The End of the F***ing World graphic novel has been adapted into a  critically acclaimed television series that is distributed by Netflix. He is also a graduate of the Center for Cartoon Studies. He lives in Hancock, Mass.