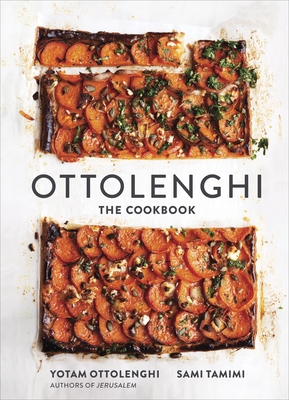 Available for the first time in an American edition, this debut cookbook, from bestselling authors Yotam Ottolenghi  and Sami Tamimi of Plenty and Jerusalem, features 140 recipes culled from the popular Ottolenghi restaurants and inspired by the diverse culinary traditions of the Mediterranean.

Yotam Ottolenghi’s four eponymous restaurants—each a patisserie, deli, restaurant, and bakery rolled into one—are among London’s most popular culinary destinations. Now available for the first time in an American edition and updated with US measurements throughout, this debut cookbook from the celebrated, bestselling authors of Jerusalem  and Plenty features 140 recipes culled from the popular Ottolenghi restaurants and inspired by the diverse culinary traditions of the Mediterranean.

The recipes reflect the authors’ upbringings in Jerusalem yet also incorporate culinary traditions from California, Italy, and North Africa, among others. Featuring abundant produce and numerous fish and meat dishes, as well as Ottolenghi’s famed cakes and breads, Ottolenghi invites you into a world of inventive flavors and fresh, vibrant cooking.

Yotam Ottolenghi is a seven-time New York Times best-selling cookbook author who contributes to the New York Times Food section and has a weekly column in The Guardian. His Ottolenghi Simple was selected as a best book of the year by NPR and the New York Times; Jerusalem, written with Sami Tamimi, was awarded Cookbook of the Year by the International Association of Culinary Professionals and named Best International Cookbook by the James Beard Foundation. He lives in London, where he co-owns an eponymous group of restaurants and the fine-dining destinations Nopi and Rovi.

Sami Tamimi is a partner and head chef at Ottolenghi and co-author of Jerusalem: A Cookbook.

“This is simply wonderful cooking...modern, smart, and thoughtful. I love it.”
—Nigel Slater, author of Tender and Ripe

“Ottolenghi and Tamimi have a genius for adding intrigue to every dish, for making spices and herbs surprising, and for combining flavors that draw us in and warm our hearts. Each recipe in this book has the mark of originality and the power to inspire.”
—Dorie Greenspan, author of Around My French Table