Mornings in Jenin: A Novel (Paperback) 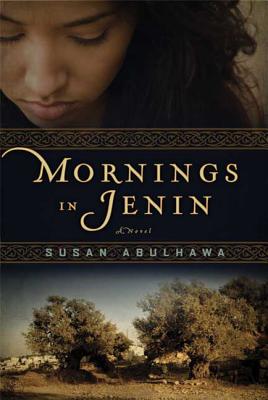 A heart-wrenching, powerfully written novel that does for Palestine what The Kite Runner did for Afghanistan.

Mornings in Jenin is a multi-generational story about a Palestinian family. Forcibly removed from the olive-farming village of Ein Hod by the newly formed state of Israel in 1948, the Abulhejos are displaced to live in canvas tents in the Jenin refugee camp. We follow the Abulhejo family as they live through a half century of violent history. Amidst the loss and fear, hatred and pain, as their tents are replaced by more forebodingly permanent cinderblock huts, there is always the waiting, waiting to return to a lost home.

The novel's voice is that of Amal, the granddaughter of the old village patriarch, a bright, sensitive girl who makes it out of the camps, only to return years later, to marry and bear a child. Through her eyes, with her evolving vision, we get the story of her brothers, one who is kidnapped to be raised Jewish, one who will end with bombs strapped to his middle. But of the many interwoven stories, stretching backward and forward in time, none is more important than Amal's own. Her story is one of love and loss, of childhood and marriage and parenthood, and finally the need to share her history with her daughter, to preserve the greatest love she has.

Set against one of the twentieth century's most intractable political conflicts, Mornings in Jenin is a deeply human novel - a novel of history, identity, friendship, love, terrorism, surrender, courage, and hope. Its power forces us to take a fresh look at one of the defining conflicts of our lifetimes.

Susan Abulhawa was born to refugees of the Six Day War of 1967, and moved to the United States as a teenager. In 2001, she founded Playgrounds for Palestine, Inc., to build playgrounds for children in occupied territories. A biologist, mother, and activist, Susan has contributed essays to the New York Daily News, Chicago Tribune, Christian Science Monitor, and Philadelphia Inquirer, among other publications. Mornings in Jenin, her first novel, was published in a hardcover edition by Journey Publications in 2006 under the title The Scar of David, but fell out of print. It is widely available for the first time, in a fully revised edition.

"Every now and again a literary work changes the way people think. Abulhawa...has crafted a brilliant first novel about Palestine... [This] intensely beautiful fictionalized history... should be read by both politicians and those interested in contemporary politics." - Library Journal

"This complex story is beautifully told... The perspective is brutal, yet ultimately not without hope... [Abulhawa] draws us into the nightmare of her heroine's existence with convincing passion." - Historical Novels Review

"Abulhawa's pathos and mastery enables the reader to taste, smell and grasp the chronicles of Palestine as if one is actually there... Lovely and heartrending, this story is a must-read for those who wish to not only understand the catastrophe of the Palestinians with their heads but with their hearts." - Palestine Chronicle