23 Things They Don't Tell You about Capitalism (Hardcover) 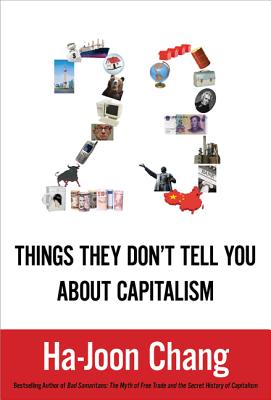 By Ha-Joon Chang
Unavailable. Orders will be auto-cancelled.

Thing 1: There is no such thing as free market.
Thing 4: The washing machine has changed the world more than the Internet.
Thing 5: Assume the worst about people, and you get the worst.
Thing 13: Making rich people richer doesn't make the rest of us richer.

If you've wondered how we did not see the economic collapse coming, Ha-Joon Chang knows the answer: We didn't ask what they didn't tell us about capitalism. This is a lighthearted book with a serious purpose: to question the assumptions behind the dogma and sheer hype that the dominant school of neoliberal economists-the apostles of the freemarket-have spun since the Age of Reagan. Chang, the author of the international bestseller Bad Samaritans, is one of the world's most respected economists, a voice of sanity-and wit-in the tradition of John Kenneth Galbraith and Joseph Stiglitz. 23 Things They Don't Tell You About Capitalism equips readers with an understanding of how global capitalism works-and doesn't. In his final chapter, How to Rebuild the World, Chang offers a vision of how we can shape capitalism to humane ends, instead of becoming slaves of the market. Ha-Joon Chang teaches in the Faculty of Economics at the University of Cambridge. His books include the bestselling Bad Samaritans: The Myth of Free Trade and the Secret History of Capitalism. His Kicking Away the Ladder received the 2003 Myrdal Prize, and, in 2005, Chang was awarded the Leontief Prize for Advancing the Frontiers of Economic Thought.

Ha-Joon Chang teaches in the Faculty of Economics at the University of Cambridge. His books include the international bestseller Bad Samaritans: The Myth of Free Trade and the Secret History of Capitalism and Kicking Away the Ladder, winner of the 2003 Myrdal Prize. In 2005, Chang was awarded the Leontief Prize for Advancing the Frontiers of Economic Thought.

“Chang, befitting his position as an economics professor at Cambridge University, is engagingly thoughtful and opinionated at a much lower decibel level. ‘The “truths” peddled by free-market ideologues are based on lazy assumptions and blinkered visions,’ he charges.”—Time

“Chang presents an enlightening précis of modern economic thought—and all the places it’s gone wrong, urging us to act in order to completely rebuild the world economy: ‘This will [make] some readers uncomfortable…[;] it is time to get uncomfortable.’”—Publishers Weekly

“Shaking Economics 101 assumptions to the core … Eminently accessible, with a clearly liberal (or at least anticonservative) bent, but with surprises along the way—for one, the thought that markets need to become less rather than more efficient.”—Kirkus Reviews

“For anyone who wants to understand capitalism not as economists or politicians have pictured it but as it actually operates, this book will be invaluable.”—John Gray, Observer (UK)

“For 40 years, I have worked as a journalist and trained thousands of other journalists from my former perches as a University of Missouri Journalism School professor and as executive director of Investigative Reporters and Editors. I have written newspaper articles, magazine features and entire books with heavy doses of economics policy and business behavior. I wish the book 23 Things They Don’t Tell You About Capitalism had been available when I was a rookie; I would have been more alert to the hands-off-business catechism by which Americans are relentlessly indoctrinated.”—Steven Weinberg, Remapping Debate

“I doubt there is one book, written in response to the current economic crisis, that is as fun or easy to read as Ha-Joon Chang's 23 Things They Don't Tell you About Capitalism.”—AlterNet Executive Editor Don Hazen