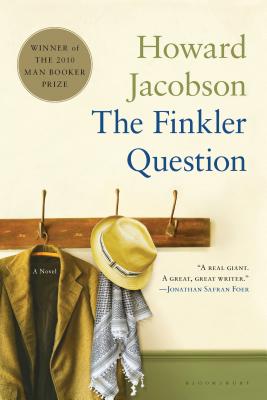 By Howard Jacobson
$17.00
Not available to order.

Julian Treslove, a professionally unspectacular and disappointed BBC worker, and Sam Finkler, a popular Jewish philosopher, writer and television personality, are old school friends. Despite a prickly relationship and very different lives, they've never quite lost touch with each other - or with their former teacher, Libor Sevick, a Czechoslovakian always more concerned with the wider world than with exam results.

Now, both Libor and Finkler are recently widowed, and with Treslove, his chequered and unsuccessful record with women rendering him an honorary third widower, they dine at Libor's grand, central London apartment.

It's a sweetly painful evening of reminiscence in which all three remove themselves to a time before they had loved and lost; a time before they had fathered children, before the devastation of separations, before they had prized anything greatly enough to fear the loss of it. Better, perhaps, to go through life without knowing happiness at all because that way you had less to mourn? Treslove finds he has tears enough for the unbearable sadness of both his friends' losses.

And it's that very evening, at exactly 11:30pm, as Treslove hesitates a moment outside the window of the oldest violin dealer in the country as he walks home, that he is attacked. After this, his whole sense of who and what he is will slowly and ineluctably change.

The Finkler Question is a scorching story of exclusion and belonging, justice and love, aging, wisdom and humanity. Funny, furious, unflinching, this extraordinary novel shows one of our finest writers at his brilliant best.

An award-winning writer and broadcaster, Howard Jacobson was born in Manchester, brought up in Prestwich and was educated at Stand Grammar School in Whitefield, and Downing College, Cambridge, where he studied under F. R. Leavis. He lectured for three years at the University of Sydney before returning to teach at Selwyn College, Cambridge. His novels include The Mighty Walzer (winner of the Bollinger Everyman Wodehouse Prize), Kalooki Nights (longlisted for the Man Booker Prize) and, most recently, the highly acclaimed The Act of Love. Howard Jacobson lives in London.

Winner of the 2010 Man Booker Prize “Like all of [Jacobson’s] work, The Finkler Question has a kind of energy that you have to look at through your fingers, like an eclipse. As the brightness of his brilliance is hard to look at, so is the darkness of his humor. I don't know a funnier writer alive.”—Jonathan Safran Foer "Like Phillip Roth, to whom he is fairly compared, Howard Jacobson is a magnificent prose stylist who is often at his most serious when he is being uproariously funny. This novel, which won the Man Booker Prize this year, is both a send-up of some very silly people, and an examination of Jewish identity in relation to rising tides of anti-Zionism and anti-Semitism. I don't think you have to be Jewish to find it funny, touching, and troubling.”—Jacob Weisberg, Slate, "Best Books of 2010" “Mr. Jacobson doesn’t just summon [Philip] Roth; he summons Roth at Roth’s best. This prizewinning book is a riotous morass of jokes and worries about Jewish identity, though it is by no means too myopic to be enjoyed by the wider world. It helps that Mr. Jacobson’s comic sensibility suggests Woody Allen’s, that his powers of cultural observation are so keen, and that influences as surprising as Lewis Carroll shape this book… Even in its darkest moments The Finkler Question offers many examples of… the most pernicious and authentic strain of Jewish humor: the kind that’s so real it isn’t funny at all.”—New York Times “A striking novel and a subtle one… The Finkler Question has all the qualities we expect from Mr. Jacobson—especially a mordant wit, sometimes as acrid as it is exuberant. He has been called the English Philip Roth, and it is true that the two authors have in common a white-hot indignation, at anti-Semitism and much else... With The Finkler Question, Mr. Jacobson has managed to channel his themes and his characters' emotions... with nuance, insight and, yes, laughter.”—Wall Street Journal, Best Books of 2010

“The Finkler Question tackles an uncomfortable issue [Jewish identity] with satire that is so biting, so pointed, that it pulls you along for 300 pages and leaves a battlefield of sacred cows in its wake… Like all great Jewish art… it is Jacobson’s use of the Jewish experience to explain the greater human one that sets it apart…It’s a must read, no matter what your background.”—National Public Radio

“Rare is a work of fiction that takes on the most controversial issues facing Jews so directly—and with enough humor, intelligence, and insight—that it changes a reader’s mind or two.  Be warned: The Finkler Question will probably distress you on its way to disarming you.  Can we pay a novel any greater compliment?”—Barnes & Noble Review

“The Finkler Question, a clever, canny, textured, subtle, and humane novel exploring the friendship of three ageing male friends…is a work of greatness… Although The Finkler Question is by no means a straightforward comic novel, it once again demonstrates Jacobson’s mastery of the form… Jacobson’s capacity to explore the minutiae of the human condition while attending to the metaphysics of human existence is without contemporary peer.”—Daily Beast

"The acrobatic wit and biting humor Jacobson displayed in Kalooki Nights and The Mighty Walzer is honed sharp in The Finkler Question. Masterfully, Jacobson will bury a joke only to knock you out with a punch line 10 pages later. Though undeniably a comic novel, The Finkler Question. is a tragicomedy, centered on a wayward man whose quest for a self serves as a platform for Jacobson to explore the complexities of British Jewish identity…this is a book of big, rich ideas and, if those ideas sometimes take precedent over plot, it's still a joy being on Treslove's journey and inside Jacobson's head." —San Francisco Chronicle “The Finkler Question is often awfully funny, even while it roars its witty rage at the relentless, ever-fracturing insanity of anti-Semitism, which threatens to drive its victims a little crazy, too.  This is, after all, a comedy that begins and ends in grief.”  —Washington Post

“[A] wry, devastating novel… Jacobson’s prose is effortless—witty when it needs to be, heartbreaking where it counts—and the Jewish question becomes a metaphor without ever being overdone.”—Publishers Weekly, starred review

“Jacobson uses Julian’s transformation as a way of examining, often with a mordant wit reminiscent of comedian Larry David’s, what it means to be Jewish. Winner of the 2010 Man Booker Prize, this novel also offers poignant insights into the indignities of aging, the competitiveness of male friendship, and the yearning to belong.” —Booklist

“It is tempting—after reading something as fine as The Finkler Question—not to bother reviewing it in any meaningful sense but simply to urge you to put down this paper and go and buy as many copies as you can carry … Full of wit, warmth, intelligence, human feeling and understanding. It is also beautifully written … Indeed, there’s so much that is first rate in the manner of Jacobson’s delivery that I could write all day on his deployment of language without once mentioning what the book is about.”—Observer (UK)

“Another masterpiece … The Finkler Question is further proof, if any was needed, of Jacobson’s mastery of humor. But above all it is a testament to his ability to describe—perhaps it would be better to say inhabit—the personal and moral worlds of his disparate characters.”—Times (UK)

“Howard Jacobson’s latest holler from the halls of comic genius … The opening chapters of this novel boast some of the wittiest, most poignant and sharply intelligent comic prose in the English language … Jacobson’s brilliance thrives on the risk of riding death to a photo-finish, of writing for broke. Exhilaration all the way.”—Scotsman

“Howard Jacobson [is] a writer able to recognize the humor in almost any situation and a man as expansive as most on the nature of Jewishness.”—Telegraph (UK)

“This charming novel follows many paths of enquiry, not least the present state of Jewish identity in Britain and how it integrates with the Gentile population. Equally important is its exploration of how men share friendship. All of which is played out with Jacobson’s exceptionally funny riffs and happy-sad refrains … Jacobson’s prose is a seamless roll of blissfully melancholic interludes. Almost every page has a quotable, memorable line.”—Independent on Sunday (UK)

“Both an entertaining novel and a humane one.”—Financial Times

“There are some great riffs and skits in The Finkler Question … But at the heart of the book is Julian the wannabe Jew, a wonderful comic creation precisely because he is so tragically touching in his haplessness. The most moving (and funniest) scenes are those in which he and Libor, the widower with nothing more to live for, ruminate on love and Jewishness.”—Sunday Times (UK)

“For some writers a thorough investigation of the situation of British Jews today might do as the subject for a single book. In The Finkler Question it’s combined with his characteristically unsparing—but not unkindly—ruminations on love, aging, death and grief. He also manages his customary—but not easy—trick of fusing all of the above with genuine comedy … No wonder that, as with most of Jacobson’s novels, you finish The Finkler Question feeling both faintly exhausted and richly entertained.”—Sunday Telegraph (UK)

“A terrifying and ambitious novel, full of dangerous shallows and dark, deep water. It takes in the mysteries of male friendship, the relentlessness of grief and the lure of emotional parasitism.”—Guardian (UK)

“Jacobson writes perceptively about how durable friendships are compounded, in large part, of envy, schadenfreude and betrayal.”—Literary Review (UK)

“Jacobson is at the height of his powers … As the men tussle with women and their absence, and their own identities, Jacobson’s wit launches a fusillade of hard-punching aperçus on human nature and its absurdities that only he could have written.”—Metro (UK)

“The Finkler Question, which is as provocative as it is funny, as angry as it is compassionate, offers a moving testimony to a dilemma as ancient as the Old Testament. It also marks another memorable achievement for Jacobson, a writer who never fires blanks and whose dialogue, which reads like an exchange between Sigmund Freud and Woody Allen, races along like a runaway train.”—Herald Scotland

“Here are three men who are in varying ways miserably womanless. This is rich soil for comedy, and Jacobson tills it for every regretful laugh he can muster … Perhaps [Jacobson’s] Leopold Bloom time has come at last.”—Irish Independent

“The Finkler Question is characterized by [Jacobson’s] structuring skill and unsimplifying intelligence—this time picking through the connections and differences, hardly unremarked but given fresh treatment here, between vicariousness and parasitism, and between Jewishness, Judaism and Zionism.”—New Statesman

“Full of caustic moments … that are also, essentially, funny … No matter the book’s themes, the way Jacobson weds humor to seriousness makes it affecting for anyone.”—Jewish Week