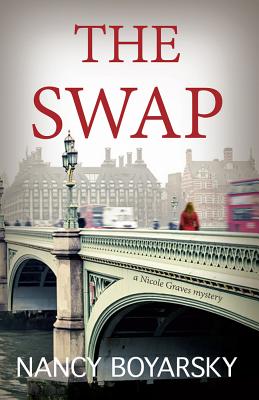 By Nancy Boyarsky
$16.99
Backordered. Place an order and we will let you know when to expect your book.

When Nicole Graves arranges a summer-long swap of her Los Angeles condo for a London couple’s house, she thinks it’s the perfect arrangement. She’s always dreamed of seeing the real London; she’s also hopeful the time away with her husband Brad will be good for their troubled marriage. But things don’t turn out the way Nicole expects: The Londoners fail to arrive in L.A. and appear to be missing. Then people begin following Nicole and making threats, demanding information she doesn’t have. Soon, Nicole realizes she’s in serious trouble––but she can’t get Brad or the police to believe her. When the confrontations turn deadly, Nicole must either solve the case or become the next victim.

Nancy Boyarsky has been a writer and editor for her entire working career. She coauthored Backroom Politics, a New York Times notable book, with her husband, Bill Boyarsky. She has written several textbooks on the justice system. She has written articles for publications such as the Los Angeles Times, Forbes, and McCall’s. She has also contributed to political anthologies, including In the Running, about women’s political campaigns, and The Challenge of California by the late Eugene Lee. In addition to her writing career, Nancy has served as communications director for political affairs for ARCO. She is a graduate of U.C. Berkeley with a major in English literature. She resides in Los Angeles.
The Swap is Nancy’s debut novel and the first of the Nicole Graves Mysteries. She is currently working on The Bequest, book two of the series, which takes Nicole on a high-speed chase through her hometown of Los Angeles. To connect with Nancy, visit her online at nancyboyarsky.com.

"I loved this Hitchcockian thriller of a woman who innocently swaps houses only to find herself caught up in a web of mystery and intrigue. (Not to mention a bit of romance.) Taut, suspenseful, and fast-paced, The Swap is a terrific read. I recommend it highly.” —Laura Levine, author, This Pen for Hire

"Delightful. Set amidst the quaint neighborhoods of London and the wild lochs of Western Scotland, this tale of a house swap gone criminally wrong will appeal to mainstream mystery fans. Skulking strangers, assumed identities, and the protagonist’s increasingly distant husband amp up the paranoia and suspense." –Denise Hamilton, author, The Jasmine Trade