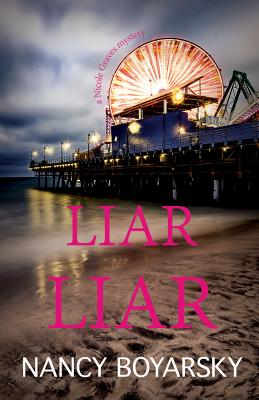 The truth is elusive in Liar Liar.

"Tough and likeable" (Foreword Reviews) Nicole Graves finds herself in the crosshairs when she reluctantly agrees to babysit a witness in a high-profile rape trial. Mary Ellen Barnes is suing her university's star quarterback for rape when the authorities won't act. In the court of public opinion, Mary Ellen appears to be the quintessential, pious, good girl. But her lies and mysterious comings and goings lead Nicole to suspect that she’s not what she seems.

It isn't just Mary Ellen who's acting suspiciously. No one wants to own up to the truth in Liar Liar, not even Nicole, whose fiance; begs her not to look into the case. But when the witness goes missing during the trial, Nicole is caught up in a tangle of lies that turns deadly. After the investigator assigned to the case fails to do his job, Nicole is determined to find the killer on her own, no matter the risks.

"Boyarsky's imagination serves up a court case that plays with expectations during an era where we push to believe women, resulting in some real bad baddies whom it feels good to root against." -Foreword Reviews

"Nicole Graves is the best fictional sleuth to come down the pike since Sue Grafton's Kinsey Millhone." -Laura Levine, author of the popular Jaine Austen Mysteries

All Nicole Graves Mysteries can be read as stand-alone novels.

Nancy Boyarsky is the bestselling author of the Nicole Graves mysteries. Before turning to mysteries, Nancy coauthored Backroom Politics, a New York Times notable book, with her husband, Bill Boyarsky. She has written several textbooks on the justice system as well as articles for publications including the Los Angeles Times, Forbes, and McCall’s. She also contributed to political anthologies, including In the Running, about women’s political campaigns. In addition to her writing career, she was communications director for political affairs for ARCO. Liar, Liar is the third Nicole Graves novel, following The Swap and The Bequest, each of which can be read as a stand alone. Readers are invited to connect with Nancy through her website at nancyboyarsky.com.

"Nicole Graves is a charming and straight-shooting heroine"  —Foreword Reviews

"Full of page-by-page surprises."  —Kirkus Reviews on The Swap

It’s Nicole’s assignment to protect a college student who has accused a star athlete classmate of sexual assault. But Nicole’s bumpkin-seeming ward makes a confession to her and runs away, and then things really start to go wrong.

This mystery, the third in Boyarksy’s 'Nicole Graves' series, is fast moving and can stand alone. As Nicole gets more and more involved in untangling the case, the audience learns more about her past. She’s still in training to be an investigator, but that doesn’t keep her from investigating on her own. At times, it seems like she’s the only one on the case.

Nicole’s morals keep getting her in trouble; major plot points revolve around her trying to clear the names of the innocent, and this do-gooding drives the plot. Her impulses and instincts get her in sticky situations, risking both her own safety and her relationship with her worried fiancé. Still, she closes in on what really happened.

Boyarsky’s imagination serves up a court case that plays with expectations during an era where we push to believe women, resulting in some real bad baddies whom it feels good to root against.

The legal proceedings feel realistic, and the glam California backdrop is fun and vivid, traffic and all. The different characters Nicole meets within legal and police systems are dimensional; the mystery of who’s on the up-and-up prevails. One issue with a minor character is left unaddressed, but otherwise the thrills wrap up in a satisfying conclusion, poising Nicole for her next big adventure.

It is great to see such a smart and determined woman protagonist in an unpredictable mystery with plenty of women supporting characters." —MEREDITH GRAHL COUNTS, Foreword Reviews  (September/October 2018)