Gottland: Mostly True Stories from Half of Czechoslovakia (Hardcover) 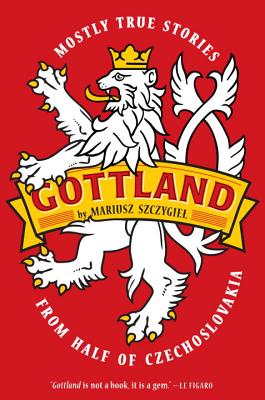 By Mariusz Szczygiel, Antonia Lloyd-Jones (Translated by)
Unavailable. Orders will be auto-cancelled.

Winner of the Europe Book Prize

One of Europe’s most preeminent investigative journalists travels to the Czech Republic—the Czech half of the former Czechoslovakia, the land that brought us Kafka—to explore the surreal fictions and the extraordinary reality of its twentieth century.

For example, there’s the story of the small businessman who adopted Henry Ford’s ideas on productivity to create the world’s largest shoe company—and hired modernist giants such as Le Corbusier to design his company towns (which were also the birthplaces of Ivana Trump and Tom Stoppard).

Or the story of Kafka’s niece, who loaned her name to writers blacklisted under the Communist regime so they could keep publishing.

Or the story of the singer Karel Gott, winner of the country’s Best Male Vocalist Award thirty-six years in a row, whose summer home, Gottland, is the Czech Dollywood.

Based on meticulous research and hundreds of interviews with everyone from filmmakers to writers to pop stars to ordinary citizens, Gottland is a kaleidoscopic portrait of a resilient people living through difficult and often bizarre times—equally funny, disturbing, stirring and absurd . . . in a word, Kafkaesque.

Mariusz Szczygieł is one of Europe’s most celebrated journalists. A reporter for Gazeta Wyborcza, he is the author of a number of books of reportage about the Czech Republic and Poland. His books are published in sixteen countries and have been awarded the Europe Book Prize and the Prix Amphi, among other honors. From 1995–2001, he hosted the popular talk show Na każdy temat (“On Any Topic”) on Polish television. Together with Wojciech Tochman and Paweł Goźliński, Szczygieł runs the Institute of Reportage in Warsaw. In 2013, he was named “Journalist of the Year” in Poland.

Antonia Lloyd-Jones is the pre-eminent translator of Polish reportage: the authors she has translated included Wojciech Tochman, Wojciech Jagielski, Jacek Hugo-Bader, and Witold Szabłowski. She has received the Found in Translation Award for translation from Polish twice, in 2008 and 2012.

“Gottland offers an indelible account of the ravages of 20th-century totalitarianism and the way it continues to pollute human thought and behavior in the 21st century."
—New York Times

“Amazingly surreal vignettes...these stories are presented with plenty of breathing room for the reader to make inferences. I love that kind of writing."
—NPR, Best Books of 2014

“The absurd details of the stories in this collection are presented with such wry insouciance that it’s easy to forget (even with the book’s explicit subtitle) that this is a work of non-fiction... It’d be a work of dark comedy if it weren’t, but as it stands, Szczygiel’s Gottland is something altogether more devastating."
—Daily Beast

“Gottland is so new and inventive, it feels like a milestone of both journalism and creative nonfiction… A fascinating portrait of a people whose silence seems to speak louder than any words could.”
—NPR

“One of those delightfully unclassifiable books... Szczygiel is strange and funny, constantly off at jaunty tangents."
—Julian Barnes' Book of the Year, The Guardian (UK)

“The relationship between art and politics is a running theme, with due reverence for those who kept their integrity. Szczygiel’s absorbing, offbeat history celebrates the truths they defended against oppression."
—Financial Times

"Non-fiction stories from Czechoslovakia, which show a country more fantastical than even its wildest literature led us to believe."
—The Guardian (UK)

“Extraordinary... Gottland is one of the funniest books I have read — and one of the shrewdest — about what it was like to live under fascism and communism, the experience of so much of Europe in the last century. It is not about Czechoslovakia or Poland or even limited to Mitteleuropa, but about how one copes with tyranny and corruption and preserves a conscience… Important and enjoyable."
—The Spectator (UK)

“Szczygieł's great accomplishment is to have illuminated these Czech stories with such insight and humor that we end up laughing in spite of ourselves, laughing in outrage and disbelief... Gottland represents not only admirable storytelling but admirable history, too. For all its humor, the book takes its subjects and their sufferings seriously, compassionately."
—Quarterly Conversation

“Szcygiel offers true stories that capture the contours of history through specificity. Trained as an investigative reporter, he’s interested in the wide-angle view of the Czech political identity and finds stories of individuals during key points in the timeline to reflect it.”
—Biographile

“Snappy, moving, inquisitive, and ethical… Assembling in-depth profiles, which wind and turn on themselves as if fables, and interspersing wry vignettes, these vivid reports compel one’s attention.”
—PopMatters

“[Szczygiel] is a true master of his craft and brilliantly combines personal insight with an in-depth research and facts.”
—Prague Post

“Impassioned, insightful snapshots of life in pre–Velvet Revolution Czechoslovakia… Whether chronicling the sculpting of Prague’s monument to Joseph Stalin or the dubious allegiances of writer Jan Prochazka, the atmosphere Szczygiel evokes is glumly foreboding yet intensely interesting. A controversial, insightful work from Poland’s 2013 journalist of the year.”
—Kirkus Reviews

“A great book. Mariusz Szczygieł is well versed in the Polish school of reportage writing and he applies his method to this specific Czech ambiguity. Original and surprising.”
—Agnieszka Holland

“If you want to understand the Czech Republic in the twentieth century, read Gottland.”
—Frankfurter Allgemeine Zeitung (Germany)

“One of the most valuable and eloquent testimonies about the Czech people.”
—Právo (Czech Republic)