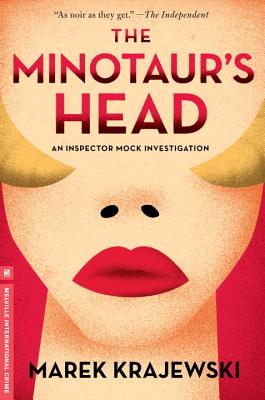 By Marek Krajewski, Danusia Stok (Translated by)
$25.95
Email or call for price.

The fourth volume in the Inspector Eberhard Mock Quintet, the series called "As Noir as it gets" by the The Independent.

When Abwehr Captain Eberhard Mock is called from his New Year's Eve revelries to attend a particularly grisly crime scene, his notoriously robust stomach is turned. A young girl—and suspected spy—who arrived by train from France just days before, has been found dead in her hotel room, the flesh torn from her cheek by her assailant's teeth. Ill at ease with the increasingly open integration of S.S., Gestapo and police, Mock is partially relieved to be assigned to liaise with officers in Lvov, Poland, where a series of similar crimes—as yet unsolved—cast a long shadow over the town.

In Lvov he joins the ongoing investigation conducted by Commissioner Popielksi, a fellow classicist who relies on a highly unorthodox method of deduction. Meanwhile, Popielski is worried by the behaviour of his only daughter, Rita. Her head has been turned by her charismatic drama teacher, and now, unbeknownst to her father, she has started receiving letters from an ardent secret admirer.

Eberhard Mock—older, a little wiser, but still a libertine at heart and equally at home in the underworld as in the ranks of authority—once again confirms his position as the most outrageous and unpredictable detective in crime fiction.

MAREK KRAJEWSKI is an award-winning Polish crime writer and linguist. He is best known for his series of five Chandleresque novels set in pre-war Wrocław (which was, at the time, Breslau) with the policeman Eberhard Mock as the protagonist. These novels have been translated into 14 languages: English, French, German, and Italian, among others.

DANUSIA STOK is the translator of all five books in the Inspector Mock series, as well as The Last Wish by Andrzej Sapkowski.