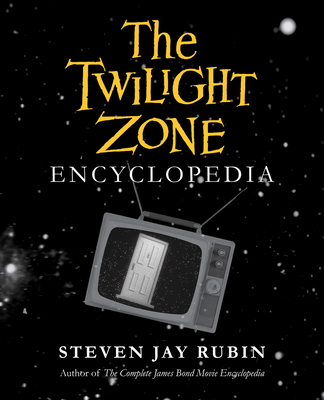 A rich, fact-filled collectible, packed with vibrant history, amazing trivia, and rare photographs, The Twilight Zone Encyclopedia, assembled with the full cooperation of the Rod Serling estate, includes biographies of every principal actor involved in the series and hundreds who toiled behind the scenes—producers, writers, and directors. It is an exhaustive and engrossing guide, a compendium of credits, plot synopses, anecdotes, production details, never-before-seen images, and interviews with nearly everyone still alive who was associated with the show.

Steven Jay Rubin is a noted film historian, motion picture producer, and documentarian. The author of The Complete James Bond Movie Encyclopedia, a former staff writer for Cinefantastique, and a 25-year motion picture public relations veteran, he has made frequent appearances at sci-fi, fantasy, and comics conventions. He lives in Los Angeles.

“Absolutely impossible to put down. With his well-earned reputation for thorough research, Steve Rubin has crafted a compendium that will be both useful and enjoyable for fans of The Twilight Zone and anyone who loves vintage television.” —Leonard Maltin, New York Times bestselling author, historian, and film critic

“Steven Rubin has managed to write a book that will enthrall a Twilight Zone newbie as well as the hardcore fan. Meticulously researched and endlessly entertaining, it’s a veritable Everything You Wanted to Know About ‘The Twilight Zone’ but Were Afraid to Ask. You’ll want to have the book close by next time you watch an episode of the Rod Serling classic on television.”  —Susan King, staff writer, Los Angeles Times, film and television historian

“This monumental book is required reading for all devotees of The Twilight Zone. It’s a combination bible, guidebook, dictionary, and encyclopedia and should be on the library shelf of all fans and scholars.”  —Carol Serling, widow of Twilight Zone creator Rod Serling

“An incredible treasure trove of details and crucial information you never knew you needed, The Twilight Zone Encyclopedia is lovingly researched, written, and presented. This book is a true gift to all fans of what is, arguably, the greatest series to ever grace the airwaves.” —J. J. Abrams


“Slip into another dimension with this expansive guide on everything Twilight Zone. From tidbits and trivia even the most stalwart fan will be impressed by, and chock full of rare photos and episode guides covering every inch of the storied CBS program, The Twilight Zone Encyclopedia is made ‘to serve man’ indeed.”—Geeks of Doom


“fans of the original series will lose a few hours flipping through this thorough, lovingly created book.”—Booklist

“The most fun to be had with The Twilight Zone Encyclopedia, aside from the archival joys of reading Rubin’s detailed biographies of cast members… is found in the entries for broadly generic themes like “Children,” “Aliens,” “Nostalgia,” “Eccentrics,” and “Monsters.” Each of these meditates on a given subject’s representation in the show, imparting a nutshell census of about a page and a half that both speaks to the varied depiction of, say, “Obsession” or “Disappearances,” and makes for perfect marathon binging-by-topic.”—NYR Daily