Thought Reform and the Psychology of Totalism: A Study of Brainwashing in China (Paperback) 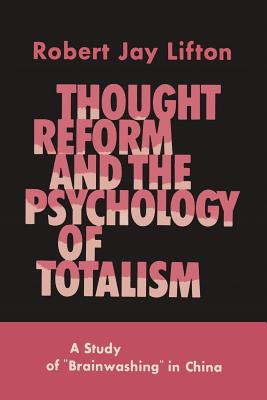 By Robert Jay Lifton
$19.95
Out of Stock; Usually Arrives in 5-7 Days
(This book cannot be returned.)

2014 Reprint of 1961 Edition. Full facsimile of the original edition, not reproduced with Optical Recognition Software. Lifton's research for the book began in 1953 with a series of interviews with American servicemen who had been held captive during the Korean War. In addition to interviews with 25 Americans, Lifton also interviewed 15 Chinese who had fled their homeland after having been subjected to indoctrination in Chinese universities. From these interviews, which in some cases occurred regularly for over a year, Lifton identified the tactics used by Chinese communists to cause drastic shifts in one's opinions and personality and "brainwash" American soldiers into making demonstrably false assertions. This work has become a classic text in the field and continues to serve as a fundamental guide in the debriefing of former cult members. Lifton's famous eight criteria for thought control are: Milieu Control. This involves the control of information and communication both within the environment and, ultimately, within the individual, resulting in a significant degree of isolation from society at large. Mystical Manipulation. There is manipulation of experiences that appear spontaneous but in fact were planned and orchestrated by the group or its leaders in order to demonstrate divine authority or spiritual advancement or some special gift or talent that will then allow the leader to reinterpret events, scripture, and experiences as he or she wishes. Demand for Purity. The world is viewed as black and white and the members are constantly exhorted to conform to the ideology of the group and strive for perfection. The induction of guilt and/or shame is a powerful control device used here. Confession. Sins, as defined by the group, are to be confessed either to a personal monitor or publicly to the group. There is no confidentiality; members' "sins," "attitudes," and "faults" are discussed and exploited by the leaders. Sacred Science. The group's doctrine or ideology is considered to be the ultimate Truth, beyond all questioning or dispute. Truth is not to be found outside the group. The leader, as the spokesperson for God or for all humanity, is likewise above criticism. Loading the Language. The group interprets or uses words and phrases in new ways so that often the outside world does not understand. This jargon consists of thought-terminating clich's, which serve to alter members' thought processes to conform to the group's way of thinking. Doctrine over person. Member's personal experiences are subordinated to the sacred science and any contrary experiences must be denied or reinterpreted to fit the ideology of the group. Dispensing of existence. The group has the prerogative to decide who has the right to exist and who does not. This is usually not literal but means that those in the outside world are not saved, unenlightened, unconscious and they must be converted to the group's ideology. If they do not join the group or are critical of the group, then they must be rejected by the members. Thus, the outside world loses all credibility. In conjunction, should any member leave the group, he or she must be rejected also.