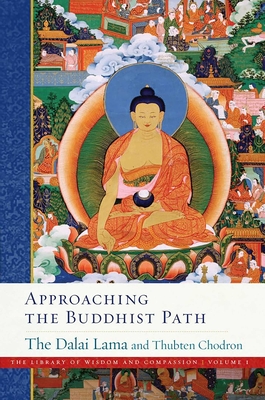 The first volume in a multivolume collection presenting the Dalai Lama’s comprehensive explanation of the Buddhist path—now in paperback!

His Holiness the Dalai Lama has been publicly teaching Buddhism for decades. This series collects his presentations of every step of the path to enlightenment, compiled and coauthored by one of his chief Western disciples, the American nun Thubten Chodron.

The Buddha wanted his students to investigate, to see for themselves whether what he said was true. As a student of the Buddha, the Dalai Lama promotes the same spirit of investigation, and as the rich tradition of the Buddha makes its way into new lands and cultures, His Holiness has recognized that new approaches are needed to allow seekers in the West to experience the relevance of the liberating message in their own lives. Such an approach cannot assume listeners are free from doubt and already have faith in Buddhism’s basic tenets. The Library of Wisdom and Compassion series, therefore, starts from the universal human wish for happiness and presents the dynamic nature of the mind. This first volume, now in paperback, also provides a wealth of reflections on Buddhist history and fundamentals, contemporary issues, and the Dalai Lama’s own personal experiences. It stands alone as an introduction to Buddhism but also provides a foundation for the systematic illumination of the path in the volumes to come.

His Holiness the Dalai Lama, Tenzin Gyatso, was born in 1935 in rural eastern Tibet and recognized as a toddler as the reincarnation of the Thirteenth Dalai Lama. Groomed to be a Buddhist scholar monk and the leader of his people, his life changed dramatically when his homeland was occupied by Chinese Communist forces in the 1950s. Fleeing to India with thousands of his fellow Tibetans, he helped reestablish cultural institutions in exile and went on to become an inspiration and force for peace worldwide for his unyielding commitment to nonviolence, dialogue, and universal ethics. Winner of the Nobel Peace Prize, he is the now in his eighties and continues to travel and teach extensively.

Thubten Chodron has been a Buddhist nun since 1977. A graduate of UCLA, she is founder and abbess of Sravasti Abbey in Washington State. She is a popular speaker and a bestselling author of numerous books, including Buddhism for Beginners.