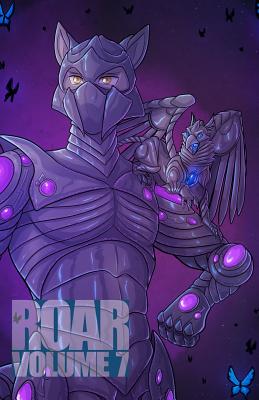 This is book number 7 in the Roar series.

Welcome to a LEGENDARY volume of ROAR That's right, the theme for the seventh volume is legend, and it will take you on a journey from a fortune teller's bamboo hut to the end of the world in the coils of a dead snake god, back in time to the Cretaceous and then up to the stars. You'll meet tigers and cranes practicing Kung Fu, a singing frog, a gambling pigeon, a rap-star bearded dragon, a rhinoceros who's friends with a goat, and several creatures you've probably never seen before.

Crouching Tiger, Standing Crane by Kyla Chapek
The Frog Who Swallowed the Moon by Renee Carter Hall
The Torch by Chris "Sparf" Williams
A Rock Among Millions by Skunkbomb
The Pigeon Who Wished For Golden Feathers by Corgi W.
Unbalanced Scales by Bill Kieffer
Reason by Heidi C. Vlach
Old-Dry-Snakeskin by Ross Whitlock
Kitsune Tea by E.A. Lawrence
A Touch of Magic by John B. Rosenman
Long Time I Hunt by Erin Lale
The Butterfly Effect by Jay "Shirou" Coughlan
The Roar by John Giezentanner
Trust by TJ
The Golden Flowers by Priya Sridhar
A Thousand Dreams by Amy Fontaine
Puppets by Ellis Aen