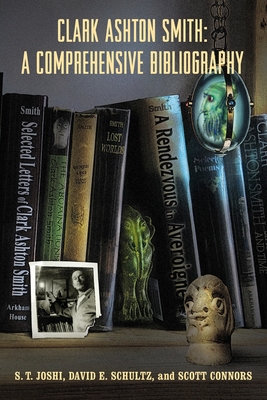 In 1978, Donald Sidney-Fryer published the first full-scale bibliography of Clark Ashton Smith, Emperor of Dreams. In the more than forty years since that book's appearance, the publication and study of Smith's work have increased exponentially, and a new, more exhaustive bibliography is long overdue. The three compilers of this volume, all leading authorities on Smith, have now achieved this monumental feat.

Smith created a sensation when he published The Star-Treader and Other Poems (1912) at the age of 19. He issued several other poetry collections before moving on to writing tales of horror, fantasy, and science fiction for a wide variety of pulp magazines. He later resumed the writing of poetry, publishing numerous poems in English, French, and Spanish in little magazines, while his stories appeared in several volumes issued by Arkham House.

This volume details the totality of Smith's writings, from rare pamphlets to all his appearances in magazines to translations of his work into a dozen or more languages. It also chronicles the burgeoning field of Smith criticism, from books and pamphlets about Smith to newspaper articles from local papers to analyses in academic journals. A section on adaptations of Smith's work into various media--films, television shows, comic books, musical settings, and spoken-word recordings--is also included.

This volume is an essential work for any devotee or scholar of Clark Ashton Smith, charting the widespread dissemination of his tales, poems, and other writings throughout the world.