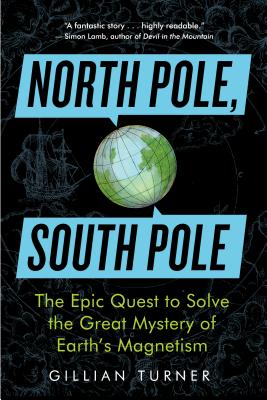 Why do compass needles point north—but not quite north? What guides the migration of birds, whales, and fish across the world’s oceans? How is Earth able to sustain life under an onslaught of solar wind and cosmic radiation? For centuries, the world’s great scientists have grappled with these questions, all rooted in the same phenomenon—Earth’s magnetism.

Over 2,000 years after the invention of the compass, Einstein called the source of Earth’s magnetic field one of greatest unsolved mysteries of physics. Here, for the first time, is the complete history of the quest to understand Earth’s magnetism—from the ancient Greeks’ fascination with lodestone, to the geological discovery that the North Pole has not always been in the North—and to the astonishing modern conclusions that finally revealed the true source.

Richly illustrated and skillfully told, North Pole, South Pole unfolds the human story behind the science: that of the inquisitive, persevering, and often dissenting thinkers who unlocked the secrets at our planet’s core.

Gillian Turner is a senior lecturer in physics and geophysics at Victoria University in Wellington, New Zealand. The winner of numerous awards for excellence in teaching and science communication, Turner has published over fifty articles in scientific journals. This is her first book.

“[An] engaging appreciation of science at work discovering the mysteries of magnetism.”
—Kirkus Reviews

“A compelling narrative of the two-thousand-year scientific struggle to unlock the innermost secrets of the cosmic speck of dust we call home. Engagingly written in a lively style accessible to all.”
—M. E. (Ted) Evans, Professor Emeritus, Department of Physics, University of Alberta, Edmonton

“The book is as much about the history of science as it is about the actual science itself, illustrating how we are often “standing on the shoulders of giants.” . . . Beautifully illustrated with maps and ancient experimental devices that helped set the focus for the study of magnetism, the book is concerned with instrumentation and innovation. . . . Certainly history and science teachers at all levels would benefit from reading it.”
—National Science Teachers Association

"She has provided a concise and interesting history of the study of magnetism, and a fascinating new perspective on one of the most important geological discoveries of the twentieth century. . . It's well worth a look!"
—Geotripper blog

"North Pole, South Pole is a comprehensive account of one of the great forces that shapes our planet and its future."
—Richmond Times-Dispatch