The Taco Cleanse: The Tortilla-Based Diet Proven to Change Your Life (Paperback) 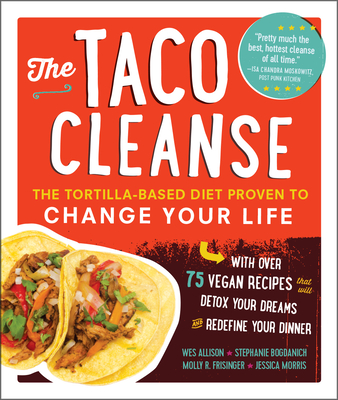 Prevent or reverse taco deficiency. Get that fresh taco-y feeling with over 75 seriously tasty vegan recipes.

Tired of the same old cleanse? Instead of feeling rejuvenated are you feeling depleted, anxious, and cranky? (Not to mention . . . hungry?) A group of vegan taco scientists in Austin, Texas, know just how you feel, and now reveal their one-of-a-kind cleansing journey that anybody can follow and stick to—the Taco Cleanse. While the typical cleanse works by depriving you of your favorite foods, the plant-based Taco Cleanse rewards your body with what it naturally craves: tortillas, refried beans, guacamole!

Begin with a breakfast taco, the most important taco of the day. Even if you do nothing else, your mood will brighten in just 24 hours. Keep eating tacos and within a week your outlook will be noticeably improved. After 30 days, cleansers report lasting benefits—and you will, too!

The Taco Cleanse shows you:The Taco Cleanse is cheap, easy, and delicious. Its recipes are authentically Austin, and are sometimes even inspired by Mexico, where the taco was first created. Everything tastes better folded (exactly once) into a tortilla. Just eat one or more tacos at every meal, adding margaritas as necessary. It’s that simple.

Wes Allison is the chief nutrition scientist and illustrator for The Taco Cleanse. Taco cleansing took his perspective on life from “meh” to “yeah!” He lives in Austin, Texas (where else?).

Stephanie Bogdanich blogs about vegan recipes, restaurant reviews, and Austin happenings at lazysmurf.wordpress.com. She enjoys whiling away her time in hammocks, especially in tropical locales, and although she loves breakfast tacos, she sometimes sleeps too late to get them.

Molly Frisinger is the writer behind Lone Star Plate, the blog of vegan Texas, where she covers vegan food, lifestyles, communities, and activism from El Paso to Houston. She lives in Austin, Texas, with her husband and two cats, and she has strong opinions about chili (no beans!).

Jessica Morris is a vegan tattooed bunny-hugging hair colorist who runs Rabbit Food Grocery, an online and pop-up vegan shop based in Austin, Texas. She firmly believes that even those who hate to cook can enjoy the benefits of a Taco Cleanse.

One of Amazon’s Best Books of the Month in Cookbooks, Food & Wine

“I only ate tacos for a week and it made me so much healthier.”—Esquire

“Diets don't get any better than this.”—Eater

“Now, here’s a cleanse we can get behind.”—People

“The next trendy cleanse to hit Los Angeles incorporates avocados, kale, tempeh, tortillas—and plenty of margaritas. It's called the taco cleanse, it's vegan, and it's here just in time for all those New Year's resolutions you have every intention of keeping.”—Los Angeles Times

“Pretty much the best, hottest cleanse of all time.”—Isa Chandra Moskowitz, author of Post Punk Kitchen

“The Taco Cleanse is the only cleanse we want to try this year.”—Huffington Post

“The book pokes fun at the tired diet industry while providing the reader with some kick-ass recipes along the way.”—MindBodyGreen

"Close your eyes. Now, imagine a world where a health cleanse means a steady stream of tacos for breakfast, lunch and dinner. Now open your eyes. That day is here."—Today.com

“The recipes are no joke.”—Everyday Health

“The Taco Cleanse is the only cleanse you’ll ever need.”—Jezebel

“The glorious guide to achieving all your wildest dreams (i.e., living on tacos) is laid out in the eponymous cookbook The Taco Cleanse.”—Bustle

“Your New Year's detox can be a lot more painless than you anticipated.”—Refinery29

“So this will be the year I finally try a radical dieting plan, now that we have the culinary equivalent of God skysurfing by with finger guns ablaze, saying, ‘Hey bud, I like your style.’”—Jake Kilroy, Playboy

“The diet that you’ll actually be able to stick with.”—The Daily Meal

“This taco cleanse is the new year's resolution of your dreams.”—PopSugar

“The empowering, guilt-free, and soul-satisfying journey you’re about to take your body and mind through will be not only supremely delicious (as tacos are involved) but also life-changing.”—from the foreword by Laura Beck, author of Vegansaurus