Too Big for a Single Mind: How the Greatest Generation of Physicists Uncovered the Quantum World (Hardcover) 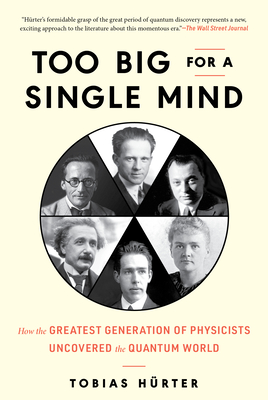 The epic story of how, amid two world wars, history’s greatest physicists redefined the universe and the reality we live in

There may never be another era of science like the first half of the twentieth century, when a peerless cast of physicists—Albert Einstein, Marie Curie, Max Planck, Wolfgang Pauli, Niels Bohr, Werner Heisenberg, Erwin Schrödinger, and others—came together to uncover the quantum world, a concept so outrageous and shocking, so contrary to traditional physics, that its own founders rebelled against it until the equations held up and fundamentally changed our understanding of reality. In propulsive, page-turning chapters, Tobias Hürter takes us back to a uniquely harrowing and momentous time, when war and revolution upended the lives of these renegade scientists, who were forced to crisscross Europe as they worked together to topple classical physics.

These tumultuous decades would also be the culmination and closing chapter of a more serendipitous—and more human—kind of research. Today, physics has principally become a practical discipline conducted at large-scale facilities. Great breakthroughs are now rarely made in the mind, or among colleagues sparring during walks on the beach, at Christmas parties, in university cafeterias, or late-into-the-night debates at conferences. Too Big for a Single Mind takes us back to this golden age of physics, when the creation of quantum theory demanded the combined efforts of friends and rivals, lovers and loners, straight-edged intellectuals and freethinking dreamers. In this stirring, grand narrative, brought to life by the letters, notes, research papers, diaries, and memoirs they wrote, we witness the birth of an idea that not only revolutionized physics and our world, but that stands as a testament to the boundless potential of genius in collaboration.

Tobias Hürter studied mathematics and philosophy in Munich and Berkeley. He has written about science and philosophy for magazines and newspapers since 2000, including as an editor at MIT Technology Review and as cofounder of the philosophy magazine Hohe Luft. Now a permanent freelance editor at Die Zeit Magazin Wissen, he lives in Munich.

Translator David Shaw works as a journalist for Germany’s international broadcaster, Deutsche Welle, and translates from several languages, including German, Dutch, Russian, and French. He lives in Berlin.

“Hürter guides us through the time when physicists developed their fundamental theories.”—Frankfurter Allgemeine Zeitung

“Too Big for a Single Mind by Tobias Hürter highlights the work of Marie Curie, Max Planck, Wolfgang Pauli, Niels Bohr, Werner Heisenberg, Ernst Schrödinger, Albert Einstein, and others did together to shake up physics and introduce quantum mechanics, arguing that the field’s discovery was a collaborative effort.”—Publishers Weekly