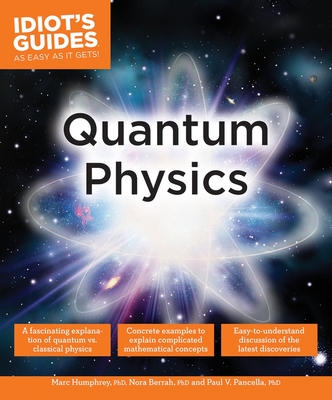 Quantum physics explores the behavior of matter and energy at the molecular, atomic, nuclear, and even smaller levels. Idiot's Guides: Quantum Physics explores this very complex topic, while making it easy-to-understand for science enthusiasts and students alike. It skips the complicated math and dives right in to all of the concepts, paradoxes, and implications that make quantum physics so fascinating. Topics include quantum vs. classical physics, the famous double-slit experiment, quantum wave function, the Heisenberg Uncertainty Principle, the Schrodinger's cat thought experiment, quantum entanglement, competing interpretations, quantum gravity, and much more.

Marc Humphrey earned his BS in physics and applied mathematics at Western Michigan University, where he was recognized with a Goldwater fellowship, and his PhD in atomic physics at Harvard University. While at Harvard, he was awarded the Harold White Prize for Outstanding Teaching and the Certificate for Distinction in Teaching. Over the past ten years, he has focused on explaining science to nonscientists during his day jobs at the U.S. Department of State, the U.S. Department of Energy, and the International Atomic Energy Agency. He also served as a Peace Corps volunteer in Mali.