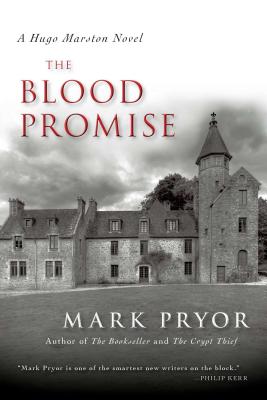 This is book number 3 in the Hugo Marston series.

Hugo Marston must figure out what lies hidden inside an old sailor's chest before a 200-year-old blood promise is revealed and claims another life. In post-Revolution Paris, an old man signs a letter in blood, then hides it in a secret compartment in a sailor's chest. A messenger arrives to transport the chest and its hidden contents, but then the plague strikes and an untimely death changes history. Two hundred years later, Hugo Marston is safeguarding an unpredictable but popular senator who is in Paris negotiating a France/U.S. dispute. The talks, held at a country chateau, collapse when the senator accuses someone of breaking into his room. Theft becomes the least of Hugo's concerns when someone discovers a sailor's chest and the secrets hidden within, and decides that the power and money they promise are worth killing for. But when the darkness of history is unleashed, even the most ruthless and cunning are powerless to control it.

Mark Pryor (Austin, TX) is the author of The Bookseller and The Crypt Thief, the first two Hugo Marston novels, and the true-crime book As She Lay Sleeping. An assistant district attorney with the Travis County District Attorney’s Office, in Austin, Texas, he is the creator of the true-crime blog DAConfidential. He has appeared on CBS News’s 48 Hours and Discovery Channel’s Discovery ID: Cold Blood. Visit him online at www.markpryorbooks.com, www.facebook.com/pages/Mark-Pryor-Author, and http://DAConfidential.com.

Praise for The Blood Promise:

“Mark Pryor is one of the smartest new writers on the block. His new novel is a doozy.”
—Philip Kerr, author of A Man Without Breath, a Bernie Gunther novel

"Pryor seems to have hit his stride in this series, as he adroitly juxtaposes the light banter between Marston and Green with some scenes of intense emotion.... And, all the while, the suspense ramps up. Top-notch mystery in a skillfully delineated Parisian setting."
—Booklist

“The Crypt Thief is an eerily good read. Mark Pryor has crafted another chilling, complex, and compelling story. Don’t start it if you need a good night’s sleep!”
—Allison Leotta, author of Speak of the Devil

"Pryor's steady and engrossing debut combines Sherlockian puzzle solving with Eric Ambler–like spy intrigue. With a cast of characters you want to know better. . . ."
—Library Journal Starred Review and Debut of the Month!

"A tale of a city that's gritty, utterly real and filled with surprises both horrifying and tender. Much like a baguette, this fabulous story is crusty on the outside, sweet on the inside, and once you've had a bit, you can't wait for more."
—Oprah.com