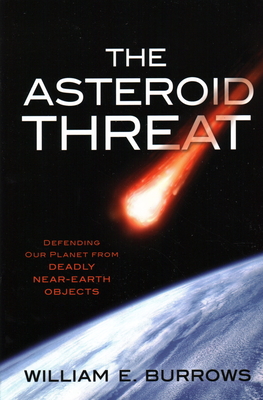 Presents a realistic, workable plan for defusing a potentially lethal threat from a rogue asteroid or comet.


The explosion of a large meteor over Chelyabinsk, Siberia, in February 2013 is just the latest reminder that planet Earth is vulnerable to damaging and potentially catastrophic collisions with space debris of various kinds. In this informative and forward-looking book, veteran aerospace writer William E. Burrows explains what we can do in the future to avoid far more serious impacts from "Near-Earth Objects" (NEOs), as they are called in the planetary defense community.  The good news is that humanity is now equipped with the advanced technology necessary to devise a long-term strategy to protect the planet. Burrows outlines the following key features of an effective planetary defense strategy:

* A weapons system to be used as a last-ditch method to blast an NEO should all else fail.

The author notes the many benefits for world stability and increasing international cooperation resulting from a united worldwide effort to protect the planet.

Combining realism with an optimistic can-do attitude, Burrows shows that humanity is capable of overcoming a potentially calamitous situation.

William E. Burrows, professor emeritus of journalism and mass communication at New York University, is the author of twelve books and numerous articles in the New York Times, the Washington Post, the Wall Street Journal, Foreign Affairs, and other publications. He was the only nonscientist on the National Research Council's Near-Earth Object Survey and Detection Panel. In recognition of his distinguished career and expertise,  a Main Belt asteroid has been named after him, and he is a recipient of the American Astronautical Society John F. Kennedy Astronautics Award, among other honors.

“Burrows has provided a compelling case for proactively dealing with Earth-impacting comets and asteroids. He describes the ongoing search for potential Earth impactors and the available mitigation options. His entertaining asides and anecdotes, along with his several diversions into science fiction books and Earth-disaster movies, help make this an interesting read from cover to cover.”

“If we didn’t realize it already, Burrows makes clear in this excellent book that Chicken Little was right: the sky is falling. Earth is bombarded every day by thousands of small objects from space; mostly they go unnoticed, but occasionally there are larger impacts that cause considerable destruction. An impact at Chelyabinsk, Russia, in February 2013 is only the most recent one to remind us that we need to take action to protect our planet. Burrows lays out a compelling case for tracking near-Earth objects and developing strategies and technologies for mitigating this threat. He assures that planetary defense is a genuine possibility now and will become a reality in the near term.”


“The Asteroid Threat will have you looking up—for threats to Earth from asteroids. In this well-written, globe-spanning story, Burrows ably relates the history and science behind cosmic impacts. Best of all is his prudent, practical plan to save humanity.”