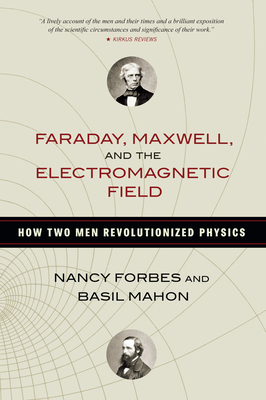 The story of two brilliant nineteenth-century scientists who discovered the electromagnetic field, laying the groundwork for the amazing technological and theoretical breakthroughs of the twentieth century

Two of the boldest and most creative scientists of all time were Michael Faraday (1791-1867) and James Clerk Maxwell (1831-1879). This is the story of how these two men - separated in age by forty years - discovered the existence of the electromagnetic field and devised a radically new theory which overturned the strictly mechanical view of the world that had prevailed since Newton's time.

The authors, veteran science writers with special expertise in physics and engineering, have created a lively narrative that interweaves rich biographical detail from each man's life with clear explanations of their scientific accomplishments. Faraday was an autodidact, who overcame class prejudice and a lack of mathematical training to become renowned for his acute powers of experimental observation, technological skills, and prodigious scientific imagination. James Clerk Maxwell was highly regarded as one of the most brilliant mathematical physicists of the age. He made an enormous number of advances in his own right. But when he translated Faraday's ideas into mathematical language, thus creating field theory, this unified framework of electricity, magnetism and light became the basis for much of later, 20th-century physics.

Faraday's and Maxwell's collaborative efforts gave rise to many of the technological innovations we take for granted today - from electric power generation to television, and much more. Told with panache, warmth, and clarity, this captivating story of their greatest work - in which each played an equal part - and their inspiring lives will bring new appreciation to these giants of science.

Nancy Forbes is an experienced science writer with over twenty-five publications in the area of science and technology including Imitation of Life:  How Biology Is Inspiring Computing. She has also served as a contributing editor for The Industrial Physicist of the American Institute of Physics, and IEEE's Computing in Science and Engineering. Currently, she works for the US Department of Defense.

Basil Mahon is the author of The Man Who Changed Everything: The Life of James Clerk Maxwell and Oliver Heaviside: Maverick Mastermind of Electricity, among other publications. With degrees in engineering and statistics, Mahon was formerly an officer in the Corps of Royal Electrical and Mechanical Engineers and until his retirement worked for the British Government Statistical Service.

"It's just the best book of its kind I have ever read, and I just hugely enjoyed it. Couldn't put it down. [Their discovery] was a fabulous human achievement."

“Compelling. …A lively account of the men and their times and a brilliant exposition of the scientific circumstances and significance of their work.”

“The life and science of these two giants of nineteenth-century physics is beautifully documented and narrated in this riveting book.”

“If it is possible for a book about the electromagnetic field to be a 'page turner,' then this book is one! . . . This conceptual approach to what can be a daunting topic . . . makes the thinking of these great scientists accessible to all. I highly recommend this book for anyone with a passion for science.”

“Perhaps the names of Michael Faraday and James Clerk Maxwell aren’t as well known as Newton or Einstein, but they should be. The book traces their amazing collaboration.... But as equally fascinating as the tale of the discovery is that of the men behind it.... A fascinating true tale of the lives of two essential men of physics!”

“Blends science history and lively biography. …Accessible writing and a feel for character make this an interesting look at two scientists whose work defined an era and set the course for modern physics.”

“Fans of biographies, as well as anyone interested in science and technology…will enjoy reading about these ‘two modest and genial men whose combined endeavors changed the world.’”