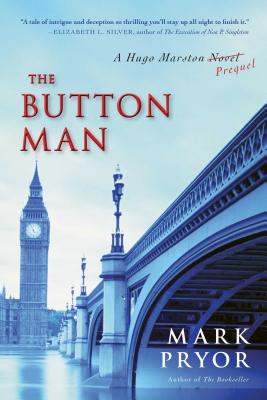 This is book number 4 in the Hugo Marston series.

In this prequel to The Bookseller, former FBI profiler Hugo Marston has just become head of security at the US Embassy in London. He’s asked to protect a famous movie-star couple, Dayton Harper and Ginny Ferro, who, while filming a movie in rural England, killed a local man in a hit and run. The task turns from routine to disastrous almost immediately. Before Hugo even meets them, he finds out that Ferro has disappeared, and her body has been found hanging from an oak tree in a London cemetery. Hours later a distraught Harper gives Hugo the slip, and Hugo has no idea where he’s run off to. Taking cues from a secretive young lady named Merlyn, and with a Member of Parliament along for the chase, Hugo’s search leads to a quaint English village. There, instead of finding Harper, more bodies turn up. Teaming with local detectives and then venturing dangerously out on his own, Hugo struggles to find connections between the victims. Is this the work of a serial killer—or something else entirely? Knowing he’s being tailed, the killer prepares for the final, public act of his murderous plan, and Hugo arrives just in time to play his part. . . .

Mark Pryor is the author of the Hugo Marston novels, The Bookseller, The Crypt Thief, and The Blood Promise, and the true-crime book As She Lay Sleeping. A native of Hertfordshire, England, he is an assistant district attorney in Austin, Texas, where he lives with his wife and three children.

“In The Button Man, Mark Pryor is at his finest, spinning a tale of intrigue and deception so thrilling you’ll stay up all night to finish it.”

"The Button Man is one of those books that’s so much fun to have waiting for you on the nightstand or desk—just sitting there, smirking at you, promising an excellent time if you’d just hurry up and get done with your chores. Terrible things, clever people, and a bit of sexy thrown in for good measure, The Button Man is well-written with a snappy pace. In short, it’s everything that makes us love mysteries in the first place.”

“The stunning English scenery, like the Parisian backdrops of Marston’s previous adventures, shines throughout the book, and Pryor has a particular gift in bringing the spookiness of the old country to an American audience…. Fits in perfectly with the rest of the Hugo Marston novels.”

“Full of surprises with delightful, quirky characters and resplendent with descriptions of London, the English villages and countryside, this prequel to The Bookseller is a well-written and entertaining read that will captivate both Hugo Marston fans and newcomers alike.”

"Once you've had a bit, you can't wait for more." —Oprah.com