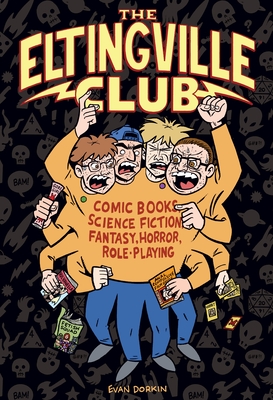 Take-no-prisoners trivia-offs. Pill-fueled Twilight Zone marathons. Fan interventions. Here is the ultimate word on the fugly side of fandom, collecting every Eltingville story from the Dork, House of Fun, and The Eltingville Club #1-2, comics three of which won the Eisner Award for Best Short Story. Also features the Northwest Comix Collective alt-comics smackdown and an afterword about the 2002 Adult Swim animated pilot. Definitive, complete and unashamed, this is fandom at it's fan-dumbest, in the mighty Eltingville manner!

Evan Dorkin (born April 20, 1965) is an American comics artist and writer. His most well-known works are the comic books Milk and Cheese and Dork. His comics often poke fun at fandom, even while making it clear that Dorkin is a fan himself. As well as his comics work, Dorkin has also written for animation, including (with his wife Sarah Dyer, also a comics writer/artist, married) Space Ghost: Coast to Coast. He also wrote and produced Bring me the Head of Boba Fett, an animated television pilot for Adult Swim called Welcome to Eltingville, based on his own characters. Dorkin and Dyer also wrote some episodes of the Superman animated series, particularly the episode "Live Wire," which introduced a new character of the same name. Additionally, the pair contributed to the script of the 2006 English-language version of the anime Shin Chan. After an initial six-episode order proved successful, more episodes were ordered, but Dorkin and Dyer are no longer working on the series. They had also been developing a pilot for a series entitled "Tyrone's Inferno" for Adult Swim for the last few years, but according to Dorkin's LiveJournal the project is dead. Dorkin has been the recipient of several Eisner Awards, including 2002's Best Writer/Artist: Humor.