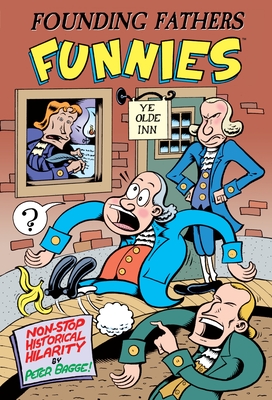 The American Revolution has never been funnier! America's founding fathers were brilliant, brave, forward-thinking. . . and ridiculous, at least in the eyes of cartoonist and history buff Peter Bagge! "I find myself laughing out loud whenever I read of their foibles, especially when their oversized egos clashed," says the author. This collection of short vignettes features some of our country's best-known historical figures (along with several lesser-known players) and includes all Founding Fathers Funnies cartoons from Apocalypse Nerd and Dark Horse Presents. This hardcover also features several brand new stories and additional biographical information!

"I can count on one hand the number of comic artists whose work is as strong . . . Maybe on two or three fingers." -Robert Crumb

"Peter Bagge is one of the best comic storytellers ever." -Vice

"Peter Bagge remains one of those premiere old-school 80s/90s alt-cartoonists who built their careers one corrosively funny page at a time." -The A.V. Club

Peter Bagge is an American cartoonist whose best-known work includes the comics Hate and Neat Stuff. Moving to New York City in the mid-1970s, Bagge attended the School of Visual Arts for three semesters in 1977 before dropping out to work on Punk Magazine. His stories often use black humor and exaggerated cartooning to dramatize the reduced expectations of middle-class American youth. He won two Harvey Awards in 1991, one for best cartoonist and one for his work on Hate. Bagge has expressed his libertarian views in features for Reason. The author lives in Seattle, WA..