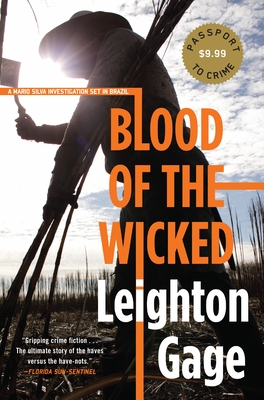 This is book number 1 in the A Chief Inspector Mario Silva Investigation series.

Chief Inspector Mario Silva of Brazil’s Federal Police is a good cop in a bad system—Brazil's justice system is rife with corruption, and constantly a beat behind criminal elements. But Silva and his team of colorful sidekicks—baby-faced Gonçalves, who is irresistible to lady witnesses; chubby, crass Nuñes; Mara Carta, the chief of intelligence with a soft spot for Mario—crack their difficult and sometimes ugly cases with pizazz.

In the interior of Brazil, landless workers battle the owners of vast fazendas. When a visiting archbishop is assassinated, Mario Silva is called upon to investigate. Then a newspaper owner, a TV journalist, a landowner's son, and a priest are brutally killed. In a country where dead street kids are known as "hams," justice is scarce.

Leighton Gage is the author of five novels in the Mario Silva series: Blood of the Wicked, Buried Strangers, Dying Gasp, Every Bitter Thing, and A Vine in the Blood. He spends part of each year in Santana do Parnaiba, Brazil, and divides the rest of the year between Florida and the Netherlands. He is married with four daughters.

Praise for Blood of the Wicked

"A Brazilian Federal cop in a country where there is no FBI or Secret Service, Silva and his men must do it all. Leighton Gage’s crime novels transport you to São Paulo, Manuas, and Brasilia."
—Yahoo! Travel, from "5 Must-Read Books that Define Brazil"

"Blood of the Wicked manages to pack a huge amount into a spare three hundred pages; power politics, petty violence, sexual scandal, saintly courage, staggering poverty and obscene wealth. A book that makes you care about its large cast of characters, even when you know that they are going to die—frequently horribly. This is a novel as rich and complex as Brazil itself, with villains who make you want to spit, and heroes whose goodness is heartbreaking."
—Rebecca Pawel, Edgar Award-winning author of Death of a Nationalist

"A dark, violent book with characters that seethe on the page . . . compelling writing. Readers will smell the steam and stench of the Amazon and recoil from the torture and depredation from which Gage averts his lens, barely in
time."
—Boston Globe