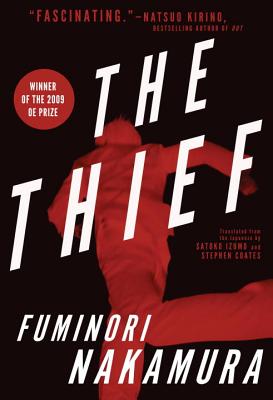 A literary crime masterpiece that follows a Japanese pickpocket lost to the machinations of fate. Bleak and oozing existential dread, The Thief is simply unforgettable.

The Thief is a seasoned pickpocket. Anonymous in his tailored suit, he weaves in and out of Tokyo crowds, stealing wallets from strangers so smoothly sometimes he doesn’t even remember the snatch. Most people are just a blur to him, nameless faces from whom he chooses his victims. He has no family, no friends, no connections.... But he does have a past, which finally catches up with him when Ishikawa, his first partner, reappears in his life, and offers him a job he can’t refuse. It’s an easy job: tie up an old rich man, steal the contents of the safe. No one gets hurt. Only the day after the job does he learn that the old man was a prominent politician, and that he was brutally killed after the robbery. And now the Thief is caught in a tangle even he might not be able to escape.

Fuminori Nakamura was born in 1977 and graduated from Fukushima University in 2000. He has won numerous prizes for his writing, including the Oe Prize, Japan’s largest literary award, and the prestigious Akutagawa Prize. The Thief, his first novel to be translated into English, was a finalist for the Los Angeles Times Book Prize. He is the recipient of the David L. Goodis Award for Noir Fiction. He lives in Tokyo with his wife.

“Fascinating. I want to write something like The Thief someday myself.”
—Natsuo Kirino, bestselling author of Edgar-nominated Out and Grotesque

"A portrait of a doomed antihero straight out of a Michael Mann or Jean-Pierre Melville movie . . . its vision of a Tokyo underworld stalked by pickpockets and random violence will have you looking over your shoulder in the rain, and the train."
—The Economist

"Citing the influence of Dostoyevsky and Kafka, Nakamura is a master of atmosphere, blending elements of surrealism, existentialism and crime fiction to create a grim, colorless, noire Tokyo."
—Tor.com

"At times the book reads like Albert Camus crossed with Elmore Leonard, yet the narrative voice is distinctly its own.... Descriptions of sleight of hand paired with philosophical musings make for a terrific read and fascinating exploration of what it means to be a criminal."
—Barnes & Noble Reads

“Nakamura’s memorable antihero, at once as believably efficient as Donald Westlake’s Parker and as disaffected as a Camus protagonist, will impress genre and literary readers alike.”
—Publishers Weekly

“Nakamura’s dark imagination gives rise to his literary world . . . the influences of Kafka and Dostoyevsky are not hard to spot.”
—The Japan Times

“The Thief manages to wrap you up in its pages, tightly, before you are quite aware of it.”
—Mystery Scene

"For readers of psychological thrillers looking for a peek into the minds populating the Tokyo underworld, The Thief is a must."
—Afar Magazine

“The reader catches glimpses of Japan and its lifestyle, which is far from a pretty picture.”
—Deadly Pleasures Mystery Magazine

“More than a crime novel, The Thief is a narrative that delves deep into the meaning of theft and the nature of justice . . . Japanese crime fiction has a new star."
—Out of the Gutter Magazine

"Brilliantly atmospheric."
—On Art and Aesthetics

“So many issues are raised in this novel. It is wonderfully brief, and spare, much like something Hemingway would write."
—Dolce Bellezza Blog