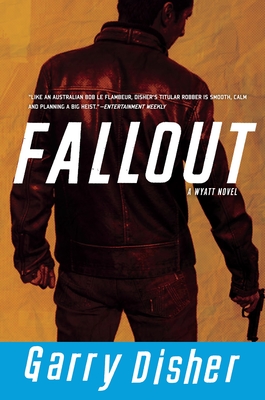 This is book number 6 in the A Wyatt Novel series.

Australian jewel thief Wyatt has a bounty of stolen jewels and a yacht, but nothing can stop him from returning to his life of crime. He drugs his lover, police officer Liz Redding, and escapes into the night only to discover the gems he lifted are fakes. With his luck and his resources rapidly running out, Wyatt begrudgingly joins forces with Raymond, his estranged nephew and an established criminal himself, to lift some expensive artwork.

It should be an easy job—the gallery is under construction and Wyatt has performed similar heists before. But it isn’t long before things go south, leaving Wyatt with some tough choices. Will the young and eager Raymond prove to be a worthy pupil or is he nothing but deadweight? For Wyatt, putting faith in other people has never been as tempting... or as dangerous.

Garry Disher is one of Australia's best-known novelists. He's published over forty books in a range of genres, including crime, children's books, and Australian history. His Hal Challis crime series is also published in the US by Soho Crime. He lives on the Mornington Peninsula, southeast of Melbourne.

"Disher continues to show an impressive knack for planning capers that go like clockwork."
—Kirkus Reviews

Praise for the Wyatt series

“There's real technique on show here.... it's so fast and hard-written that it becomes a blur, a flurry of activity that dazzles the senses.... Wyatt is a thrill-laden pleasure. I can't wait to read the others.”
—ABC Radio

“Endlessly cool, enormously competent.... a banquet for those who like it uncut and unsparing.”
—Kirkus Reviews, Starred Review

“Brilliant.... The similarities with another fictional thief—Richard Stark's antihero Parker—are many.”
—Seattle Times

“Disher takes us back to the golden age of thrillers, a time when they were fast, taut and dependably suspenseful.”
—Kirkus Reviews

“A satisfying read, with a suspenseful denouement... recommended.”
—Spinetingler Magazine


Praise for the Garry Disher

"Disher creates the kind of complex, edgy, principled yet flawed characters it's a pleasure to worry about."—Kirkus Reviews, Starred Review