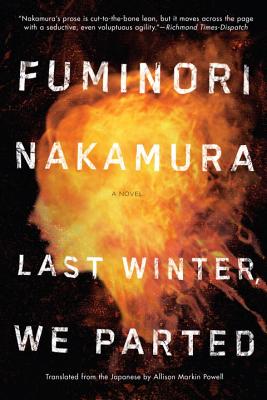 Instantly reminiscent of the work of Osamu Dazai and Patricia Highsmith, Fuminori Nakamura's latest novel is a dark and twisting house of mirrors that philosophically explores the violence of aesthetics and the horrors of identity.

A young writer arrives at a prison to interview a convict. The writer has been commissioned to write a full account of the case, from the bizarre and grisly details of the crime to the nature of the man behind it. The suspect, a world-renowned photographer named Kiharazaka, has a deeply unsettling portfolio lurking beneath the surface of each photograph is an acutely obsessive fascination with his subject.
He stands accused of murdering two women both burned alive and will likely face the death penalty. But something isn t quite right. As the young writer probes further, his doubts about this man as a killer intensify, and he struggles to maintain his sense of reason and justice. Is Kiharazaka truly guilty, or will he die to protect someone else?
Evoking Truman Capote's In Cold Blood and Ry nosuke Akutagawa's Hell Screen, Last Winter, We Parted is a twisted tale that asks a deceptively sinister question: Is it possible to truly capture the essence of another human being?

Fuminori Nakamura was born in 1977 and graduated from Fukushima University in 2000. He has won numerous prizes for his writing, including the e Prize, Japan s largest literary award; the David L. Goodis Award; and the prestigious Akutagawa Prize. The Thief, his first novel to be translated into English, was a finalist for the Los Angeles Times Book Prize. His other novels include Evil and the Mask and The Gun."

“Fascinating. I want to write something like The Thief someday myself."
—Natsuo Kirino, bestselling author of Edgar-nominated Out and Grotesque

“Nakamura’s memorable antihero, at once as believably efficient as Donald Westlake’s Parker and as disaffected as a Camus protagonist, will impress genre and literary readers alike."
—Publishers Weekly

“Nakamura’s dark imagination gives rise to his literary world . . . the influences of Kafka and Dostoyevsky are not hard to spot.
—The Japan Times

"The Thief manages to wrap you up in its pages, tightly, before you are quite aware of it."
—Mystery Scene


Praise for Evil and the Mask

"Karma runs thicker than blood in Evil and the Mask, the thought-provoking and unpredictable new novel by the Japanese zen-noir master Fuminori Nakamura."
—Wall Street Journal

“Deals with basic questions of good and evil, guilt and remorse. Cryptic detectives, smoky nightclubs, and murky streets in Japanese suburbs add to the noir sensibility. At times bizarre, at times hallucinatory, the story is always provocative.”
—Publishers Weekly

"Evil and the Mask is a hard-to-put-down novel of ideas and a savage comment on nihilism, both Japanese and global . . . Shouldn't be missed."
—Booklist, Starred Review

"Deliciously twisted . . . Nakamura bend[s] the line between what is good and what is evil until it nearly breaks. It’s impressive how a book so dark can be so much fun."
—Grantland

"Evil and the Mask is concerned with a twisty sense of morality: is Fumihiro born evil, and can he escape the cruelty associated with his surname?"
—Omnivoracious

"Evil and the Mask is a brilliant novel from one of Japan’s most current authors . . . If you love Patricia Highsmith, you’ll love Nakamura."
—Globe and Mail

"Evil and the Mask is an engrossing account . . . The story is violent, revengeful, and often disagreeable but it still contains that hypnotic voice that makes you want to read more."
—Midwest Book Review

“Evil and the Mask delves even further into the dark . . . [It] grapples with murder, war and a deep distrust of society that manifests itself in disturbing ways.”
—The Japan Times

“Evil and the Mask, the second book of his to be available in English, is undoubtedly the narrative that will help cement him as the new master of Japanese noir . . . an absolute must-read."
—Out of the Gutter Magazine

"[Evil and the Mask is] full of themes that everyone can appreciate . . . Nakamura blurs the line between light and dark, good and evil. He illustrates that nothing in life is completely black and white."
—Tulsa Books Examiner