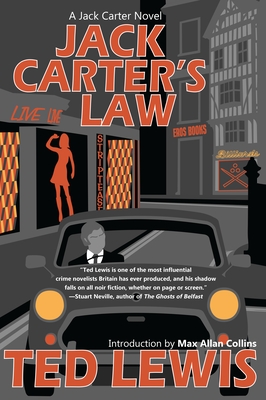 By Ted Lewis
Email or call for price
Hard to Find

This is book number 2 in the The Jack Carter Trilogy series.

With an Introduction by Max Allan Collins

The author of Get Carter returns to his greatest invention, a smooth-operating hardcase named Jack Carter, who is about to burn a city down in order to silence an informant

London. The late 1960s. It's Christmastime and Jack Carter is the top man in a crime syndicate headed by two brothers, Gerald and Les Fletcher. He’s also a worried man. The fact that he’s sleeping with Gerald’s wife, Audrey, and that they plan on someday running away together with a lot of the brothers’ money, doesn’t have Jack concerned. Instead it’s an informant—one of his own men—that has him losing sleep. The grass has enough knowledge about the firm to not only bring down Gerald and Les but Jack as well. Jack doesn’t like his name in the mouth of that sort.

In Jack Carter’s Law Ted Lewis returned to the character that launched his career and once again delivered a hardboiled masterpiece. Jack Carter is the ideal tour guide to a bygone London underworld. In his quest to dismantle the opposition, he peels back the veneer of English society and offers a hard look at a gritty world of pool halls, strip clubs and the red lights of Soho nightlife.

Born in Manchester, England, Ted Lewis (1940-1982) spent most of his youth in Barton-upon-Humber in the north of England. After graduating from Hull Art School, Lewis moved to London and first worked in advertising before becoming an animation specialist, working on the Beatles’ Yellow Submarine. His novels are the product of his lifelong fascination with the criminal lifestyle of London’s Soho district and the down-and-out lifestyle of the English factory town. Lewis' novels pioneered the British noir school. He is the author of nine novels, the second of which was famously adapted in 1971 as the now iconic Get Carter, which stars Michael Caine.

A Philadelphia Inquirer Best Book of 2014

"Carter is no hero, killing rival villains without compunction, manipulating one and all (male or female) to his advantage. But he does have a darkly contagious sense of humor, and his observing eye is keen and mean, as always."
—Tom Nolan, The Wall Street Journal

"At his best, [Lewis] achieves something only a handful of crime writers ever do — the chilling sense of cosmic fatality that links noir anti-heroes to the likes of Oedipus and Macbeth."
—NPR's Fresh Air

"Jack Carter’s Law is even tougher and more uncompromising than its famous predecessor."
—Max Alan Collins, author of Road to Perdition

"Lewis remains a sharp social anatomist of the hopelessness and soul-sucking dinginess of his era. Starting with [Get Carter], Lewis sketched the horror of a Britain where home was the kitchen sink, the sodden bar towel, the decrepit industrial landscape: a kingdom from which Carter and his like cannot escape."
—Barnes and Noble Review

"Bleaker and wittier than the just about anything in the great Richard Stark's bleak and witty Parker novels. And it has the style that modern-day makers of gangster movies such as Guy Ritchie can only dream about."
—Detectives Beyond Borders

"Rereading all three books, I was struck by the influence Lewis' novels have had on so many current hard-boiled writers whose main characters are hard cases (certainly Lee Child's Jack Reacher is a literary son). Written in first person and present tense, Lewis' trilogy has an immediacy that belies its age."
—Carole Barrowman, Milwaukee Journal-Sentinel

"The year's big event in international noir is the republication of the Jack Carter Trilogy by England's Ted Lewis. Few crime writers could inject menace and desperation into small talk the way Lewis did, and he had a fine eye for period detail."
—The Philadelphia Inquirer

"The craftsmanship at play here is staggering. There’s a reason why Ted Lewis is cited as a major influence on many writers in the crime and hard-boiled scene."
—My Bookish Ways

"An example of how dangerous writing can really be when it is done properly . . . Ted Lewis’s writing proves that he never ran away from the page. Because with Lewis, the page was the battle.”
—Derek Raymond, author of He Died with His Eyes Open

“Ted Lewis is one of the most influential crime novelists Britain has ever produced, and his shadow falls on all noir fiction, whether on page or screen, created on these isles since his passing. I wouldn’t be the writer I am without Ted Lewis. It’s time the world rediscovered him.”
—Stuart Neville, author of The Ghosts of Belfast

"When it comes to dealing with your actual hard man, no one does it better than the late, great Ted Lewis."
—John Williams, author of the Cardiff Trilogy