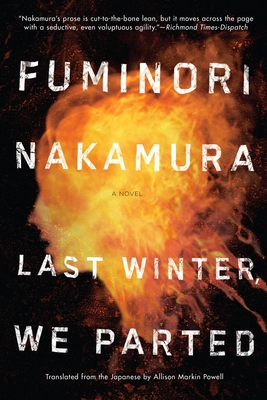 By Fuminori Nakamura, Allison Markin Powell (Translated by)
$16.95
Out of Stock; Usually Arrives in 2-5 Days

Instantly reminiscent of the work of Osamu Dazai and Patricia Highsmith, Fuminori Nakamura’s latest novel is a dark and twisting house of mirrors that philosophically explores the violence of aesthetics and the horrors of identity.

A young writer arrives at a prison to interview a convict. The writer has been commissioned to write a full account of the case, from the bizarre and grisly details of the crime to the nature of the man behind it. The suspect, a world-renowned photographer named Kiharazaka, has a deeply unsettling portfolio—lurking beneath the surface of each photograph is an acutely obsessive fascination with his subject.

He stands accused of murdering two women—both burned alive—and will likely face the death penalty. But something isn’t quite right. As the young writer probes further, his doubts about this man as a killer intensify, and he struggles to maintain his sense of reason and justice. Is Kiharazaka truly guilty, or will he die to protect someone else?

Evoking Truman Capote’s In Cold Blood and Ryūnosuke Akutagawa’s “Hell Screen,” Last Winter, We Parted is a twisted tale that asks a deceptively sinister question: Is it possible to truly capture the essence of another human being?

Fuminori Nakamura was born in 1977 and graduated from Fukushima University in 2000. He has won numerous prizes for his writing, including the Ōe Prize, Japan’s largest literary award; the David L. Goodis Award; and the prestigious Akutagawa Prize. The Thief, his first novel to be translated into English, was a finalist for the Los Angeles Times Book Prize. His other novels include Evil and the Mask and The Gun.

Praise for Last Winter, We Parted

"Crime fiction that pushes past the bounds of genre, occupying its own nightmare realm . . . For Nakamura, like [Seichō] Matsumoto, guilt or innocence is not the issue; we are corrupted, complicit, just by living in society. The ties that bind, in other words, are rules beyond our making, rules that distance us not only from each other but also from ourselves."
—David L. Ulin, Los Angeles Times

"This slim, icy, outstanding thriller, reminiscent of Muriel Spark and Patricia Highsmith, should establish Fuminori Nakamura as one of the most interesting Japanese crime novelists at work today."
—USA Today

"Some of the darkest noir fiction to come out of Japan—or any country—in recent years . . . Nakamura's stories, however labeled, are memorable forays into uncomfortable terrain."
—Tom Nolan, Mystery Scene

"A tense, layered story . . . [Nakamura's] stripped-down prose and direct style drop the reader straight into his nightmare."
—The Japan Times

"His most ambitious novel . . . Nakamura is still pursuing the notion of the dark, existential thriller, but here we find him delving into even more twisted territory."
—Grantland

"A coldly sophisticated, darkly disturbing logic puzzle written in the style of the great ice queen of the genre, Patricia Highsmith."
—Richmond Times-Dispatch

"Stands out as a chilling, philosophical look at murder and the nature of guilt."
—Ozy.com

"One unexpected punch after another."
—Kirkus Reviews

“Elegantly crafted . . . As the shadow of a second writer begins to cloud the picture, and the story accelerates down the slippery slope separating love and obsession, the twisty—and twisted—turns it takes ambush narrator and reader alike.”
—Publishers Weekly

"[Feels like] exploring the minds of characters in Truman Capote's In Cold Blood or Werner Herzog's documentary Into the Abyss. It's a creepy feeling."
—BookPage

"With an economy of prose and pages, Nakamura has created a work that one can read during the course of a long afternoon and will remember for a lifetime."
—Bookreporter.com

"Nakamura’s writing is as psychologically astute as it can be while also representing a vision of the world twisted and screwed, without joy or happiness. In other words, Last Winter, We Parted is the epitome of literary noir."
—Mystery People (Austin, TX), Pick of the Month

"An engrossing, original mystery that does not neglect the element of surprise."
—LitReactor

"Nakamura reveals not just the complexities of artistic representation, but our wish that it were not so—our desire to remake events as if they had occurred right before our eyes."
—Words Without Borders

"An old-fashioned house of mirrors . . . Nakamura's book requires (but also rewards) close attention: it is in a way a Postmodern revival of some of the tropes of classic noir and hard-boiled fiction, with a specifically Japanese sensibility."
—International Noir Fiction

"A maddening merry-go-round, a twisted story of just how far some will go for their art, or for love."
—Crime Fiction Lover (UK)

"A murder mystery that will keep you guessing at every turn, as it is never really clear who the victims and the criminals are, until the ending that you will not see coming . . . A dark and wonderful psychological mind-screw that forces the reader to question their own capacity for evil . . . The subjects of love/hate, abandonment, obsession, revenge and sexual deviation are all touched upon in a manner that reminds me of Camus, or Kafka with a pinch of Dashiell Hammitt. Recommended for fans of crime pulps, Freud, Jim Thompson, Albert Camus and Japanese Noir."
—The Thugbrarian Review

“Fascinating. I want to write something like The Thief someday myself."
—Natsuo Kirino, bestselling author of Edgar-nominated Out and Grotesque

“Nakamura’s memorable antihero, at once as believably efficient as Donald Westlake’s Parker and as disaffected as a Camus protagonist, will impress genre and literary readers alike."
—Publishers Weekly

“Nakamura’s dark imagination gives rise to his literary world . . . the influences of Kafka and Dostoyevsky are not hard to spot.
—The Japan Times

"The Thief manages to wrap you up in its pages, tightly, before you are quite aware of it."
—Mystery Scene


Praise for Evil and the Mask

"Karma runs thicker than blood in Evil and the Mask, the thought-provoking and unpredictable new novel by the Japanese zen-noir master Fuminori Nakamura."
—Wall Street Journal

“Deals with basic questions of good and evil, guilt and remorse. Cryptic detectives, smoky nightclubs, and murky streets in Japanese suburbs add to the noir sensibility. At times bizarre, at times hallucinatory, the story is always provocative.”
—Publishers Weekly

"Evil and the Mask is a hard-to-put-down novel of ideas and a savage comment on nihilism, both Japanese and global . . . Shouldn't be missed."
—Booklist, Starred Review

"Deliciously twisted . . . Nakamura bend[s] the line between what is good and what is evil until it nearly breaks. It’s impressive how a book so dark can be so much fun."
—Grantland

"Evil and the Mask is concerned with a twisty sense of morality: is Fumihiro born evil, and can he escape the cruelty associated with his surname?"
—Omnivoracious

"Evil and the Mask is a brilliant novel from one of Japan’s most current authors . . . If you love Patricia Highsmith, you’ll love Nakamura."
—Globe and Mail

"Evil and the Mask is an engrossing account . . . The story is violent, revengeful, and often disagreeable but it still contains that hypnotic voice that makes you want to read more."
—Midwest Book Review

“Evil and the Mask delves even further into the dark . . . [It] grapples with murder, war and a deep distrust of society that manifests itself in disturbing ways.”
—The Japan Times

“Evil and the Mask, the second book of his to be available in English, is undoubtedly the narrative that will help cement him as the new master of Japanese noir . . . an absolute must-read."
—Out of the Gutter Magazine

"[Evil and the Mask is] full of themes that everyone can appreciate . . . Nakamura blurs the line between light and dark, good and evil. He illustrates that nothing in life is completely black and white."
—Tulsa Books Examiner