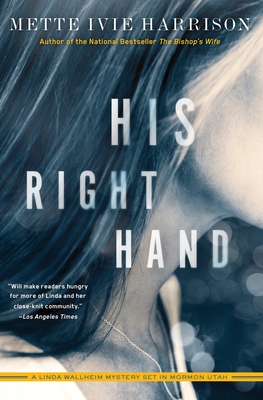 This is book number 2 in the A Linda Wallheim Mystery series.

“In this riveting and compassionate mystery, beloved counselor Carl Ashby is found dead at church, leaving the Mormon community devastated. But when Linda and Kurt Wallheim learn that Carl was originally a female the news turns their world inside out, directing their focus away from the bigger issues at hand. In a community that is so set with its gender roles, can the Wallheims look past that to discover who killed Carl and why?”
— Rachael Drummond (W), Saturn Booksellers, Gaylord, MI

In the follow-up to the controversial and critically acclaimed mystery The Bishop's Wife, Mormon housewife Linda Wallheim finds herself ruffling feathers in Draper, Utah, as she assists a murder investigation that is being derailed by transphobia within the LDS community.

In Draper, Utah, a tight-knit Mormon community is thrown into upheaval when their ward’s second counselor—one of the bishop’s right-hand men—is found dead in an elaborately staged murder on church property. Carl Ashby was known as a devout Mormon, a pillar of the community, and a loving husband and father. Who would want him dead?

Linda Wallheim, the wife of the ward’s bishop, can’t rest as long as the ward is suffering. She is particularly worried about Carl’s grieving family. But the entire case is turned upside down by the autopsy report, which reveals Carl Ashby was a biological female. In the Mormon church, where gender is considered part of a person’s soul, some people regard transgenderism as one of the worst possible sins. Church officials seem to be more upset by Carl’s gender than by his murder, and more concerned with hushing up the story than solving the crime.

Linda realizes that if the police are to catch the killer, they are going to need an ally on the inside—and she is the only one who can help. Carl was living a life of secrecy for twenty years. What else was he hiding—and can Linda ferret out the key to his death before the rumors tear her community apart?

Mette Ivie Harrison is the author of the Linda Wallheim mystery series, as well as numerous books for young adults. She holds a PhD in German literature from Princeton University and is a nationally ranked triathlete. A mother of five and member of the Mormon Church, she lives in Salt Lake City.

Praise for His Right Hand

An ABA IndieNext Selection for December 2015

"Absorbing . . . Besides the fact that I cannot resist a good mystery, Mette Ivie Harrison's books had an added allure . . . [They] are rich with real-life details that often get lost in stereotypes."
—Karen Grigsby Bates, NPR's All Things Considered

"A fast moving crime story, but also far more than that. Deep social and moral issues dealt with, and made real with compassion and honesty. I couldn't put it down!"
—Anne Perry

"For all of its thoughtful exploration of LGBT people and issues, His Right Hand is also a good mystery. Yet it's the issues the book raises that will make readers hungry for more of Linda and her close-knit community."
—Paula Woods, Los Angeles Times

"A heartfelt story that opens outsiders to a fascinating world."
—The Boston Globe

"You wouldn’t expect a book about the crime-solving wife of a staid Mormon leader to be so edgy and engrossing. It has all the outward signs of being a conventional 'cozy' mystery that plays it safe. But Linda Wallheim, the bishop’s wife, is quite the independent thinker who is full of surprises—and Harrison delivers a provocative tale that doesn’t shy away from timely social issues."
—Ft. Worth Star-Telegram

"[The] Linda Wallheim novels are worth reading, and not only for their uncompromising plot lines and compelling conclusions. They should raise important and necessary questions about Mormonism itself in every thinking Mormon’s mind."
—Association for Mormon Letters

"Intriguing . . . [Harrison] puts in the forefront many issues, such as gender and sexual orientation, to which characters react in various ways, many of which feel authentic and show that no one has a perfect life."
—The Deseret News

"His Right Hand is a fascinating novel that explores the LDS world and how it reacts when a treasured member of the church is not what he appears to be. Watching Linda juggle her duties as a bishop's wife, adjust to life as an empty-nester and solve a murder keeps readers turning the pages of this riveting mystery penned by a member of the LDS church."
—Bookreporter

"A masterpiece of socially relevant genre fiction. Her voice is one of the most unique in the genre, and I cannot wait to see what subject she will address next."
—MysteryPeople Bookstore, Pick of the Month

"Outstanding . . . The suspect pool may be small, but Harrison once again dramatizes the agonizing plight of those who firmly believe church doctrine and yet by their nature have a fundamental conflict with it."
—Publishers Weekly, Starred Review

"Harrison provides a fascinating look into the Mormon church from the point of view of a woman who sometimes struggles with its strict rules. ­Linda’s insider’s perspective is almost as engrossing as the mystery itself. Recommended for mystery lovers."
—Library Journal

"Does a wonderful job of parting the curtain on many of the Mormon Church's mysteries."
—Kirkus Reviews

"Linda is an extremely likable and refreshingly imperfect series lead—an ideal guide to aspects of Mormon life that may be unknown to many readers. She’s also curious, smart, and impulsive—essential traits for any successful amateur sleuth! In her author’s note, Harrison explains that this book was inspired by the journey of a family friend who came out as transgender and transitioned while remaining in the Mormon faith."
—Booklist

"Often we forget to pay attention to the different cultures that are on our own doorstep. I find Harrison's Linda Wallheim books to be good mysteries with strong characters. That they are also meditative and enlightening is icing on the cake."
—Kittling Books

Praise for The Bishop's Wife

“The Bishop’s Wife has good reason to draw a large readership. It places heavy emphasis on domestic abuse and on the question of how dangerous fire-breathing extremists really are. The man who inveighs against women as whores and sinners may or may not be anything worse than a crank. The man who speaks sanctimoniously of them may be much worse . . . That’s why Ms. Harrison’s Linda is such a welcome character: In her role as Sister Wallheim, she encourages women to speak freely, at least to her, and to escape the shame that has burdened some of them since childhood."
—Janet Maslin, The New York Times

"Sane, wise, likable . . . [The] solution is nicely surprising, and Linda has an engrossing voice, at once modest and assured."
—Charles Finch, USA Today

"Excellent . . . Watching Linda Wallheim take on the church and its entitled male members as she unravels the mystery of Carrie's and Helena's disappearances is one of the chief pleasures of this richly detailed debut."
—Los Angeles Times

"Eye-opening . . . A novel so far from my reality I needed a telescope, but I think that's why I enjoyed this debut so much."
—Milwaukee Journal-Sentinel

"A stunning contemporary mystery set in Mormon country . . . [Harrison] easily transports readers into a world most will find as unfamiliar as a foreign country."
—Publishers Weekly, Starred Review

"Linda is a fascinating character . . . Her ties to both her family and her church are strong, but she is not beyond questioning her deeply held beliefs when necessary."
—Booklist, Starred Review