Not of This Fold (A Linda Wallheim Mystery #4) (Hardcover) 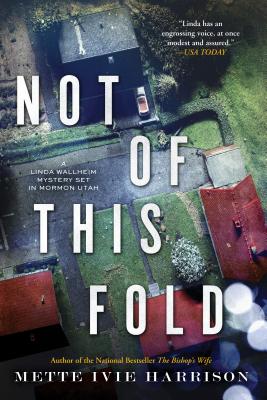 By Mette Ivie Harrison
$26.95
Not available to order.

This is book number 4 in the A Linda Wallheim Mystery series.

“Following up on her debut novel in the Linda Wallheim mystery series, Mette Ivie Harrison’s new novel again ventures into the world of Mormon women fighting for power and a voice. Wallheim is pulled by her friend and fellow doubter, Gwen Ferris, into the investigation of a murder of a Latina mother whose death threatens to reveal corruption at the very highest levels of church leadership. Harrison also deftly handles the side plot of Wallheim’s son’s struggles as an openly gay man on his first mission. Her intimate understanding of Mormonism and carefully drawn, complex characters will show readers a world and a faith in transition, mirroring the struggles of the larger culture.”
— Kelly Barth, Raven Book Store, Lawrence, KS

The fourth installment in Mette Ivie Harrison's nationally bestselling Linda Wallheim mystery series, set in Mormon Utah, explores the effects of alienation, immigration, and extortion from the inner workings of the Mormon church.


Draper, Utah: Now that all five of her sons have left home, Mormon bishop’s wife Linda Wallheim has quite a bit of time on her hands. She has befriended Gwen Ferris, a woman in her ward who is quickly losing faith in the church. Gwen has a calling in Draper’s local “Spanish ward,” which is made up of both legal and undocumented immigrants who Gwen feels don’t always get the support they need from their bishop.

When Gabriela Gonzalez, an undocumented mother of three, is found strangled at a gas station, Gwen decides the police aren’t doing enough and decides to track down the killer herself. Fearing for her young friend’s safety, Linda reluctantly joins her, but what they find during their vigilante investigation may put them both in danger.

Mette Ivie Harrison is the author of the Linda Wallheim mystery series, as well as numerous books for young adults. She holds a PhD in German literature from Princeton University and is a nationally ranked triathlete. A member of the Church of Jesus Christ of Latter-Day Saints, she lives in Utah with her husband and five children

An ABA IndieNext Pick for December 2018

Praise for Not Of This Fold

"Mormon bishop’s wife Linda Wallheim . . . offers help only someone inside the church can give. I really enjoy her thoughtful, faith-based inner monologue."
—The News & Observer

"The plight of immigrants comes home to the Mormon community of Draper, Utah, in Harrison’s exceptional fourth Linda Wallheim mystery . . . Readers of all faiths will relate to kindhearted, thoughtful Linda, a devout Mormon who isn’t afraid to question the policies and leadership of the LDS church."
—Publishers Weekly, Starred Review

"Not of this Fold is the fourth and best installment in this series."
—By Common Consent

"Harrison has continued to use her work to tackle a series of issues facing the modern Mormon world . . . another fascinating dive into the internal politics of Mormonism."
—Crime Reads

"As always, Harrison’s plotting is tight, her pacing compelling . . . As Linda continues to test the resilience of her marriage, her own faith, and her sense of responsibility to women in the area, questions and insights tumble and align. For readers of the Linda Wallheim Mystery Series, this is a must-read book."
—New York Journal of Books

"Harrison has hit her stride as a front-rank mystery novelist . . . Come for the engaging intellectual puzzle and stay for the nuanced treatment of Mormonism. Or do it the other way around. But definitely come and stay. You won’t be sorry."
—Association for Mormon Letters

"A spellbinding murder investigation amidst crises of faith . . . Mette Ivie Harrison's Not of This Fold is in a class by itself: a captivating story in which intelligence reigns supreme, where right and wrong are examined from various points of view."
—Fresh Fiction

"An engaging murder mystery that should satisfy any fan of the genre . . . Good fiction writers utilize the fantastical, the mysterious, the seemingly incredible to bring awareness to universal issues that just might inspire readers to do something about injustices they see in the day-to-day . . . with Not Of This Fold, Harrison has done exactly that."
—Dialogue: A Journal of Mormon Thought

"We're given enough evidence to join the investigation ourselves, and there are enough twists that you're never too sure who did it until the end. However, the mystery isn't what makes this novel a compelling read. It's the protagonist."
—Reviewing the Evidence

"The mystery in Not of This Fold is first-rate, with plenty of red herrings . . . The added bonus of learning more about another culture makes Harrison's entire series one you won't want to miss. I know I don't."
—Kittling Books

"Not of This Fold again ventures into the world of Mormon women fighting for power and a voice . . . [Harrison's] intimate understanding of Mormonism and carefully drawn, complex characters will draw readers into a world and a faith tradition in transition, mirroring the struggles of the larger culture."
—Kelly Barth, Raven Books (Lawrence, KS)

“The Bishop’s Wife has good reason to draw a large readership . . . Ms. Harrison’s Linda is such a welcome character: In her role as Sister Wallheim, she encourages women to speak freely.”
—The New York Times

“Critically acclaimed author Mette Ivie Harrison’s mystery debut is an insider’s nuanced look at the workings of the Mormon church. Beautifully written, and spellbinding in its unflinching examination of marriage, family and faith, The Bishop’s Wife is an absolute must-read!”
—Julia Spencer-Fleming, New York Times bestselling author of the Clare Fergusson and Russ Van Alstyne Mysteries

“Sane, wise, likable . . . Linda has an engrossing voice, at once modest and assured.”
—USA Today

“Excellent . . . Watching Linda Wallheim take on the church and its entitled male members as she unravels the mystery of Carrie's and Helena's disappearances is one of the chief pleasures of this richly detailed debut.”
—Los Angeles Times

“Eye-opening . . . A novel so far from my reality I needed a telescope, but I think that’s why I enjoyed this debut so much.”
—Milwaukee Journal-Sentinel