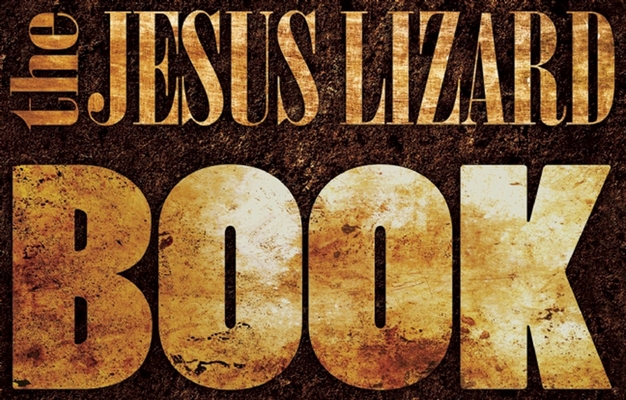 The Jesus Lizard Book is an exhaustive collection of all manner
of Jesus Lizard-related flotsam & jetsam… photographs, show
posters, rude tour-van drawings and even a recipe for Yow’s famous
Chocolate Bourbon Bread Pudding. I quite enjoyed a baby picture of Yow
sitting pants-less on his training potty… this is a suitable photo to be
included in the book as Yow has scarcely donned a pair of pants since.
Embarrassing and often down right bad-ass stories of the Lizard’s reign
of terror are sure to make any record nerd giddy with glee.

SIGNED COPIES WHILE SUPPLIES LAST!
The Jesus Lizard (1988–1999) hailed from Chicago by way of Austin, Texas. They released seven records on the independent record label Touch and Go, and a few more on different major labels. Many have called them the best live band of the 1990s. Unlike most of their contemporaries, The Jesus Lizard managed to create a beast, an entirely autonomous being, an entity who outgrew and is very likely to also outlive their makers. While each and every personality in the group is an integral part of its mentality and thus ultimately irreplaceable, it is the rapport and friction between them which makes the music possible, allows it to blossom and eventually break free.

— From Father's Day at BookPeople!

Featured as a "This Week's Reading/What We're Loving" pick at The Paris Review Named the Best Music-Related Book of 2014 by Joel Gausten "If you're a Jesus Lizard fan or a David Yow devotee, you're sure all over this. But even if you've never heard of the band, the book stands as one of the best ways to experience being in a tight, cohesive band. You get everything except the sweat, spilled beer, and blood. It's a fun ride, and the closest thing possible to getting in the van with these guys."
--Mother Jones "The Jesus Lizard Book is a beautiful document of a band that wasn't afraid to be abrasive, chaotic, brutal, and sometimes, ugly."
--The Chicago Tribune/Printers Row "These guys deserve to pat themselves on the back...If the spectacular photography in The Jesus Lizard Book is to be believed, their shows resembled nothing more than that scene in Indiana Jones and the Temple of Doom where some poor dude has his still-beating heart removed in an elaborate ritual."
--The Paris Review "As a reader, you don't need to hear the songs to appreciate the story--and Book delivers the band right to your coffee table loud and clear."
--BoingBoing.net "The gorgeously crafted, 176-page hardcover Book...dives deep and candidly into the Jesus Lizard's first decade and touches a bit on that 2009 coda, too. Through many thousands of words, hundreds of photos, and collected ephemera, it celebrates the sweat, menace, humor, musicianship, lasting power, and genitals of one of the best bands ever coughed up by the rock underground."
--The Village Voice "Book is a valuable document that brings us back to the era when artists were conditioned to practice the art of self-defense."
--Pitchfork "A series of essays and photos that illuminates the Jesus Lizard--humorous, jolting, sometimes surprisingly moving."
--The Chicago Tribune "If there is any recurring theme within the 176 pages of the newly released The Jesus Lizard Book it's this: The Chicago-grown noise rockers will be remembered as one of the greatest live bands to ever grace--or very well desecrate--the stage."
--Chicago Sun-Times "Impressively candid, informed and informative history of a remarkable group of musicians. A 'must read' for their legions of appreciative fans...Highly recommended."
--Midwest Book Review "Even if you're unfamiliar with or disinterested with the band's music, Book makes for an intriguing exploration of the alternative music scene of the '90s--a short burst in time when a band as gloriously odd as The Jesus Lizard could do whatever they wanted to do and get a pot of gold at the end of the rainbow."
--Joel Gausten The Jesus Lizard Book is a coffee table affair of exclusive photography, art, and other imagery with written pieces by all four members of the seminal indie rock band the Jesus Lizard. The layout is stylish and elegant, particularly in contrast with the harshness of much of the band's music. Included are many Polaroids by David Wm. Sims, a delicious recipe by David Yow, a concise list of every show the Jesus Lizard played, and writings by two producers who recorded the band--Steve Albini and Andy Gill. There is biographical material of each member that covers childhood to the demise of the group. Other contributors include, Mike Watt, Alexander Hacke, Steve Gullick, Rebecca Gates, Jeff Lane, Sasha Frere-Jones, KRK, Bernie Bahrmasel, and many more.

The Jesus Lizard (1988-1999) hailed from Chicago by way of Austin, Texas. They released seven records on the independent record label Touch and Go, and a few more on different major labels. Many have called them the best live band of the 1990s. Unlike most of their contemporaries, the Jesus Lizard managed to create a beast, an entirely autonomous being, an entity who outgrew and is very likely to also outlive their makers. While each and every personality in the group is an integral part of its mentality and thus ultimately irreplaceable, it is the rapport and friction between them which makes the music possible, allows it to blossom and eventually break free. It was not just David Wm. Sims's monolithic basslines, but the stance he took in order to deliver them. Like a sailor manning a raft through a storm at high sea, he took position at stage right and pounded away at his instrument--stoic, reliable, and unwavering. Mac McNeilly's drumming didn't merrily serve as a time-giver, but as a display of unrestrained energy and a joyously bouncing, good-natured spirit. Somersaulting patterns and probability-defying breaks were stacked on top of one another, made to tumble and fall only to be caught again, as if a boxer was juggling dishes while pummeling an already delirious opponent. Duane Denison shaped his guitar work like a taxidermist dissecting a puppy. With cruel precision, he stabbed and sliced and inserted the limbs of chord progressions with bolts and rods and wire, smiling dreamily while his riffs danced around onstage like biomechanical freaks of nature. Then there was the man who is the embodiment of the band's name, the tormented soul thrown about and struggling to withstand the torrent in the tornado of the music: David Yow spilled his insides while he spent most of the shows in, no on the audience, being lifted and carried by the masses, groping and ripping at him, trying to be part, greedily looking to get a piece of the action; he was the ingenious saboteur, the anarchistic oddball in this form of modern theater with the other three serving as the perfect "straight men" to his madness.