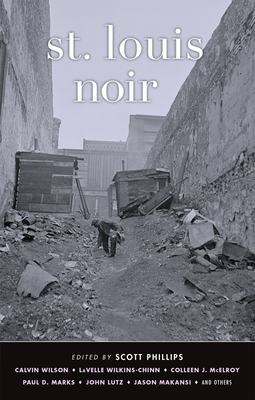 Featuring a baker's dozen of original stories, plus one 'poetic interlude, ' this new entry in Akashic's globetrotting anthology series explores, as editor Phillips, author of The Ice Harvest, tells us in his introduction, the 'collision of high and low' that makes St. Louis so interesting to crime writers...The stories here are uniformly strong. Regular readers of the Noir series (since its inception in 2004, there have been about 75 installments) know what to expect: tightly written, tightly plotted, mostly character-driven stories of murder and mayhem, death and despair, shadow and shock.
--Booklist 'Phillips lends his own talents as well, bringing the total body count to 13 works of fatalist fiction as well as a poetic interlude featuring Poet Laureate Michael Castro. Joining him as accessories are St. Louis Post-Dispatch film critic Calvin Wilson; LaVelle Wilkins-Chinn, a fiction writer whom Phillips himself taught; and writers John Lutz, Paul D. Marks, Colleen J. McElroy, Jason Makansi, S.L. Coney, Laua Benedict, Umar Lee, Chris Barsanti, Linda Smith and Jedidiah Ayres.
-- St. Louis Newspaper Phillips has shrewdly captured the fundamental elements of noir, transforming St. Louis into a gruesome world that is neither black or white, but quintessentially gray.
--Alive Magazine Joining Seattle, Memphis, Phoenix, and other noir outposts, St. Louis gets a turn to show its dark side in Phillips' collection of 13 dark tales and a poetic interlude... A] spirited, black-hearted collection.
--Kirkus Reviews Editor Scott Phillips has compiled 13 tales of grim homicidal happenings (plus one poetic interlude) set in the streets of the St. Louis area.
--St. Louis Post- Dispatch Akashic Books continues its groundbreaking series of original noir anthologies, launched in 2004 with Brooklyn Noir. Each story is set in a distinct neighborhood or location within the city of the book. Brand-new stories by: Calvin Wilson, LaVelle Wilkins-Chinn, John Lutz, Paul D. Marks, Colleen J. McElroy, Jason Makansi, S.L. Coney, Michael Castro, Laura Benedict, Jedidiah Ayres, Umar Lee, Chris Barsanti, L.J. Smith, and Scott Phillips. From the introduction by Scott Phillips: The St. Louis region has had a rough time over the past few years. A number of our school districts are unaccredited. A large section of a North St. Louis County landfill is burning uncontrolled--yes, it's on fire--and said fire is only yards away from a World War II-era radioactive waste dump. There's the matter of the region's de facto segregation, a persistent pox on the city and county decades after the explicit, institutional variety became illegal. A number of our suburban municipalities have lately been exposed in the act of strong-arming their poorest citizens, running what amount to debtors' prisons. In recent years one of those cities, Ferguson, has become a national synonym for police misconduct and institutional racism... Amid all this is a rich, multicultural history of art and literature both high and low, stemming from conflict and passions running hot...This collection strives for some of that same energy that the collision of high and low can produce...All these writers come at their work with different perspectives and styles but all with a connection to and a passion for our troubled city and its surroundings.

Scott Phillips was born in Wichita, Kansas, and lived for many years in Paris, France, and Southern California. In the early 2000s he moved to St. Louis, Missouri. He is the author of seven novels and a collection of short stories, and his novel The Ice Harvest was a New York Times Notable Book and was made into a film starring John Cusack, Billy Bob Thornton, and Connie Nielsen.