The Lost Treasures of R&B (Hardcover) 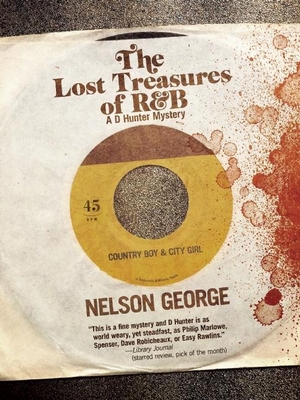 Nominated for the Brooklyn Public Library's Brooklyn Eagles Literary Prize for Fiction This is a fine mystery and protagonist] D Hunter is as world weary, yet steadfast, as Philip Marloew, Spenser, Dave Robicheaux, or Easy Rawlins. A definite yes to purchase for both mystery and African American collections.
--Library Journal (Starred Review, Pick of the Month) George covers a lot of ground with style: the rhythm-and-blues music scene past and present, the sometimes startling evolution of Brooklyn and its environs, and the multitude of hangers-on, wannabes, and grifters who want a piece of the action.
--Publishers Weekly Real relationships and real talk frame the mashup of mysteries in George's street-framed series.
--Kirkus Reviews The wonderful sing-song street slang dialogue and esoteric industry knowledge make The Lost Treasures of R&B a richly entertaining addition to George's evolving series.
--Shelf Awareness George uses The Lost Treasures of R&B to tackle the hot-button issue of the gentrification of Brooklyn (and elsewhere) as protagonist D struggles to come to terms with the ghosts of his childhood in 'old Brooklyn.'
--Philadelphia Tribune Written in the spirit of authors such as Walter Mosley and Donald Goines...The book blends music from the past with thug appeal of the present to appeal to young and old alike.
--Baltimore Times George is a historian of his culture.
--The Stranger Hunter is back in Brooklyn solving a mystery that has a backdrop firmly on the R&B scene.
--NBCBLK, 14 Books to Read This Black History Month Like its predecessor this installment of D's story fuses music, history, and crime on the streets of New York.
--Flavorpill NYC Nelson George delivers an entertaining and hard-boiled look at the music scene, and raises the question of proprietary rights and black culture.
--MysteryPeople, One of Three Picks for February As a huge R&B fan, when I ran across the title, The Lost Treasures of R&B, I just had to read it...and I'm glad I did.
--Underrated Reads Professional bodyguard D Hunter takes a gig protecting rapper Asya Roc at an underground fight club in poverty-stricken Brownsville, Brooklyn. Unknown to D, the rapper has arranged to purchase illegal guns at the event. An acquaintance of D from the streets (and from the novel The Plot Against Hip Hop) named Ice turns out to be the courier. During the exchange a robbery is attempted. Ice is wounded. D gets Asya Roc to safety but is then chased by two gunmen because he has the bag containing the guns. This lethal chase ends under the elevated subway where D and the two gunmen run into a corrupt detective named Rivera. A bloody shootout ensues. D, who has just moved back to Brooklyn after decades in Manhattan, finds himself involved in multiple mysteries. Who were the gunmen? Why were they after the guns? Who was being set up--Asya Roc or Ice? Meanwhile, he gets a much-needed paying assignment to track down the rarest soul music single ever recorded. With gentrifying Brooklyn as the backdrop, D works to unravel various mysteries--both criminal and musical--while coming to terms with the failure of his security company and the ghosts of his childhood in old Brooklyn. Like its predecessors The Accidental Hunter and The Plot Against Hip Hop, The Lost Treasures of R&B uses pop music as the backdrop for a noir-flavored big-city tale.

Nelson George is an author, filmmaker, and lifelong resident of Brooklyn. His novels include the first two in his D Hunter mystery series, The Accidental Hunter and The Plot Against Hip Hop. Among his many nonfiction works are The Death of Rhythm & Blues, Hip Hop America, the recently published The Hippest Trip in America: Soul Train and the Evolution of Culture & Style, and City Kid, his memoir. As a filmmaker he's directed the documentaries Brooklyn Boheme for Revolt, The Announcement for ESPN, and Finding the Funk for VH1. The Lost Treasures of R&B, the third book in his D Hunter mystery series, is his latest novel.