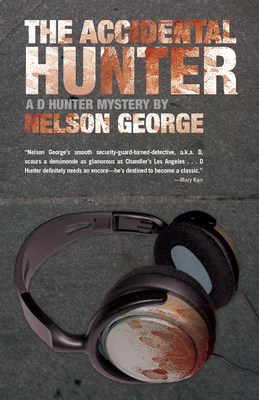 A gritty noir set in the world of New York City's hip hop culture, The Accidental Hunter introduces bodyguard-for-hire D Hunter...The violence and chaos that follows proves George to be the equal of his forebears; it's hardly a surprise that the book is dedicated to 'Coffin Ed, Grave Digger, and Easy.'
--CrimeReads, selected by Luke Geddes as one of 10 Books About the Mysterious World of Audiophiles

Great reading for the criminal-minded.
--Vibe

George writes with pace and panache...packing his tale with more glitzy characters than a red carpet E broadcast.
--Kirkus Reviews

Emmy-winning TV producer George examines the ambition, deception, corruption and pervasive drug culture that lurk on the underside of the music world in this noirish thriller.
--Publishers Weekly

The Accidental Hunter is a real page-turner, worth staying up late into the night for.
--PopMatters.com

From the beginning, there is nonstop action and excitement. D. is a man trying to survive the mean streets and do the right thing, even if it's sometimes hard to know what the right things are.
--RT Book Reviews

The ending of the book has me anticipating the next in the series.
--Rawsistaz Literary Group

The Accidental Hunter marks the debut of D Hunter, Nelson George's unforgettable bodyguard-turned-PI whom Library Journal calls ...as world weary, yet steadfast, as Philip Marlowe. A security specialist who thrives off of Manhattan's nightlife, D Hunter is the man people turn to when they need help without drawing the attention of the NYPD.

When a rising R&B star is kidnapped, music manager Ivy Greenwich hires D for an unusual assignment. Things go well, and D thinks he's done. But Greenwich has other plans: he wants D to escort mega-pop star Bridgette Haze around New York City's top hip hop clubs to give her an edgier, more urban image. Hunter reluctantly agrees, and he soon finds himself both falling for Haze and in urgent pursuit of a mysterious kidnapper, all while battling his own thirst for revenge.

Like the subsequent novels in the D Hunter Mystery series--The Plot Against Hip Hop and The Lost Treasures of R&B--The Accidental Hunter is a fast-paced, noir-tinged mystery fueled by New York City's hip hop culture.

Nelson George is an author, filmmaker, and lifelong resident of Brooklyn. His novels include the first two in his D Hunter mystery series, The Accidental Hunter and The Plot Against Hip Hop. Among his many nonfiction works are The Death of Rhythm & Blues, Hip Hop America, the recently published The Hippest Trip in America: Soul Train and the Evolution of Culture & Style, and City Kid, his memoir. As a filmmaker he's directed the documentaries Brooklyn Boheme for Revolt, The Announcement for ESPN, and Finding the Funk for VH1. The Lost Treasures of R&B, the third book in his D Hunter mystery series, is his latest novel.