Hadriana in All My Dreams (Paperback) 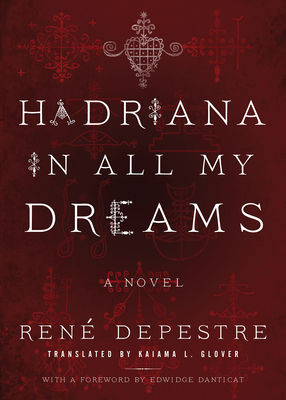 Included in 10 Best New Books to Read This May, Chicago Review of Books.

Originally published in 1988 and written by one of Haiti's seminal authors, still with us at age 90, this vibrant, erotically charged work shows how humans counter fear--particularly the fear of death--in varied more or less magical ways, even as it paints a fresh and enticing picture of Haitian culture. . .Luscious and affirmative reading, this is work both the serious-minded and the lighthearted can enjoy.
--Library Journal, Starred review

Depestre presents a rich and nuanced exploration of large and significant themes expertly couched in one fantastical, expertly translated tale.
--Booklist, Starred review One-of-a-kind... A] ribald, free-wheeling magical-realist novel, first published in 1988 and newly, engagingly translated by Glover. . .An icon of Haitian literature serves up a hotblooded, rib-ticking, warmhearted m lange of ghost story, cultural inquiry, folk art, and v ritable l'amour.
--Kirkus Reviews, Starred review The sights and sounds of Haiti's vibrant carnival season invigorate this tale of vodou and Haitian culture. . .The truth of Hadriana's fate proves more poignant than horrifying, but in Depestre's hands, this incident is a touchstone of a culture in which distinctions between the empirical and spiritual are obscured, and whose traditional celebrations and beliefs introduce an element of the mythic into the everyday. Eroticism and humor course through his narrative. Depestre's intimacy with his subject matter and his familiarity with the people he portrays--the story is set in his hometown, at the time when he was 12 years old--give readers an insider's look at Jacmelian culture.
--Publishers Weekly

With a foreword by Edwidge Danticat. Translated from the French by Kaiama L. Glover.

Hadriana in All My Dreams, winner of the prestigious Prix Renaudot, takes place primarily during Carnival in 1938 in the Haitian village of Jacmel. A beautiful young French woman, Hadriana, is about to marry a Haitian boy from a prominent family. But on the morning of the wedding, Hadriana drinks a mysterious potion and collapses at the altar. Transformed into a zombie, her wedding becomes her funeral. She is buried by the town, revived by an evil sorcerer, and then disappears into popular legend. Set against a backdrop of magic and eroticism, and recounted with delirious humor, the novel raises universal questions about race and sexuality. The reader comes away enchanted by the marvelous reality of Haiti's Vodou culture and convinced of Depestre's lusty claim that all beings--even the undead ones--have a right to happiness and true love. From the introduction by Edwidge Danticat: Despestre offers us the kind of tale we rarely get in the hundreds of zombie stories featuring Haitians, stories set both inside and outside of Haiti. In Hadriana in All My Dreams we get both langaj--the secret language of Haitian Vodou--as well as the type of descriptive, elegiac, erotic, and satirical language, and the artistic license needed to create this most nuanced and powerful novel. Kaiama L. Glover is an associate professor of French and Africana Studies at Barnard College, Columbia University. She is the author of Haiti Unbound: A Spiralist Challenge to the Postcolonial Canon, coeditor of Yale French Studies' Revisiting Marie Vieux-Chauvet: Paradoxes of Postcolonial Feminine (issue no. 128), and translator of Frenk tienne's Ready to Burst and Marie Vieux-Chauvet's Dance on the Volcano. She has received awards from the National Endowment for the Humanities, the Mellon Foundation, and the Fulbright Foundation.