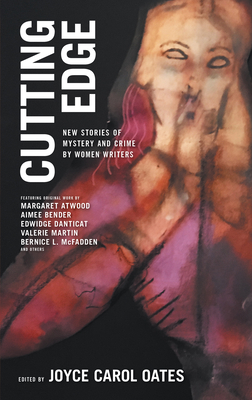 Livia Llewellyn's "One of These Nights" has won the Edgar Award for Best Short Story, presented by the Mystery Writers of America

"An eclectic anthology edited by Joyce Carol Oates. It features the work of 16 distinguished writers, including Margaret Atwood, Valerie Martin, Steph Cha and Ms. Oates herself. The theme is 'female noir, ' with shades encompassing 'sociological realism...Grand Guignol surrealism...erotic playfulness and] dark fairy-tale determinism.' Noir sensibility, male or female, Ms. Oates concludes, is 'not so much pessimistic as starkly realist, free of romantic illusion, expecting the less benign, resigned to the worst.' If not the ideal cup of holiday cheer, then, perhaps a perfect tonic for the New Year?"
--Wall Street Journal

"But of course, in the end, it isn't the themes or the innovations on the format of the short story anthology that make the tales collected in Cutting Edge most 'feel' as if you were reading Joyce Carol Oates herself. It is the writing. The tight plots and fresh, flowing prose that go about their business until--snap --the story's well-oiled mousetrap does its job."
--New York Journal of Books

"This collection of feminist crime tales edited by the one and only Joyce Carol Oates is marketed to 'readers who are sick and tired of the status quo, or who just want to have a little bit of fun at the expense of a crumbling patriarchal society.' Well, isn't that everyone?"
--CrimeReads, included in the Most Anticipated Crime Books of 2019

"Each voice is different, each story providing its own appeal, its own approach to the nature of crime, and in most instances, what it means to live in a female body in a largely hostile world."
--Brooklyn Rail

"OBF, Inc." by Bernice L. McFadden has been selected as one of the Best Mystery Stories of 2019 by Robert Lopresti of SleuthSayers

Joyce Carol Oates, a queenpin of the noir genre, has brought her keen and discerning eye to the curation of an outstanding anthology of brand-new top-shelf short stories (and poems by Margaret Atwood ). While bad men are not always the victims in these tales, they get their due often enough to satisfy readers who are sick and tired of the gendered status quo, or who just want to have a little bit of fun at the expense of a crumbling patriarchal society. This stylistically diverse collection will make you squirm in your seat, stay up at night, laugh out loud, and inevitably wish for more.

From the introduction by Joyce Carol Oates:

"The particular strength of the female noir vision isn't a recognizable style but rather a defiantly female, indeed feminist, perspective. Cutting Edge brings together a considerable range of twenty-first-century female voices, from sociological realism (Cha) to Grand Guignol surrealism (Oates); from erotic playfulness (Bender) to dark fairy-tale determinism (Khaw). Here is a brilliantly deadpan graphic story by Lisa Lim, and here are brilliantly executed poems by Margaret Atwood. Artwork by Laurel Hausler is striking and original, sinister and triumphant; Noir Dame (on the front cover) is the perfect image of a mysterious beauty, far more than merely skin-deep, and essentially unknowable."

Joyce Carol Oates is the author of a number of works of fiction, poetry, and nonfiction. She is the editor of New Jersey Noir and Prison Noir and a recipient of the National Book Award, the PEN America Lifetime Achievement Award, the National Humanities Medal, and a World Fantasy Award for Short Fiction. She lives in Princeton, New Jersey, and was recently inducted into the American Philosophical Society.