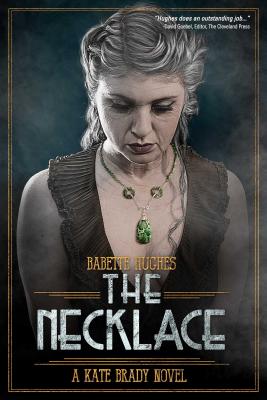 By Babette Hughes
$15.00
Backordered. Place an order and we will let you know when to expect your book.

The Necklace tells the stories of three women, each with a dangerous secret. There is 80-year-old mafia widow Kate Brady, determined that her secret will die with her--beautiful, blond and famous Andrea Pryor is being blackmailed for her secret--and 18-year-old Marianne Woodsman whose secret is hidden in her family's Park Avenue penthouse. Marianne runs for her life from her dangerously dysfunctional family, through a homeless shelter and a brothel until her story intertwines with Kate's and Andrea's in a three-generational embrace.

Nonagenarian Babette Hughes is a bootlegger's daughter whose father and uncle were murdered by the Mafia. She is a Huffington Post columnist, has published in the Saturday Review, was Contributing Editor of Cleveland Magazine; was a twice-weekly columnist for the Cleveland Press and has published articles and book reviews in the Cleveland Plain Dealer and the Sunday Magazine. She has also written, produced and appeared in television documentaries, news and feature stories for Cleveland television. In addition to her writing career she was the National Director of Women's Political Action for Hubert Humphrey in his 1972 Presidential campaign, as well as founder and President of Discover Yourself, Inc., a motivation and self-realization program for women. She has also been Director of Public Relations for Revco D.S., Inc. in Twinsburg, Ohio, and Account Executive with Frazier Associates, in Washington, DC. She and her husband live in Austin, Texas, and are the parents and step-parents of eight children.