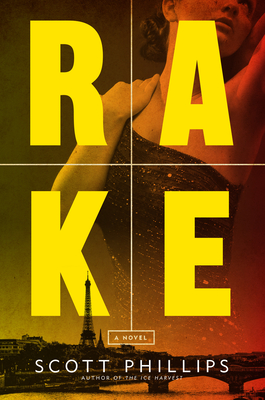 "This is straight up filthy fun as an American soap star in Paris juggles
a film deal, four lovers (at least) and the arms dealing husband of one
of them. Phillips' voice meshes with his lead characters, giving a
smart, sleazy, socially satiric crime romp." (Visit mysterypeople.wordpress.com for more of Scott's recommendations.)

Celebrity and crime pay off big time for an American sociopath in Paris in “one of the great joys in new noir fiction” (Los Angeles Review of Books).

Dr. Crandall Taylor—or rather the actor who plays him—is enjoying a cushy new life in the City of the Lights where his now–cancelled American soap opera has become a prime time retro cult hit. This newfound stardom isn’t wasted on him. Anxious to keep his brutal past a secret from fans, he’s enjoying all the fruits that fame has to offer: adulation, entrée into the trendiest clubs, and sex. What he really wants is to fund a feature film.

From the national bestselling author of The Ice Harvest comes “an ingeniously twisty old–school noir along the lines of James M. Cain” (Spinetingler Magazine). With it, the “mad, bad, and dangerous to know . . . quintessential American huckster . . . and in Phillip’s sly, deft hands we find ourselves sinking down eagerly with him, glorying in the beautiful muck” (Edgar Award–winning author Megan Abbott).

Scott Phillips is the author of The Ice Harvest, The Walkaway, Cottonwood, The Adjustment, and Rake. He was born and raised in Wichita, Kansas and lived for many years in France. He now lives with his wife and daughter in St. Louis, MO.

"Rake is one of the great joys in new noir fiction and should find itself on many year–end lists with recent efforts from Richard Lange, Daniel Woodrell, Sara Gran, and Ace Atkins. . .It's breezy and twisted fun, a sinister book to savor in a poorly lit dive bar while all your boring relatives are curled up on their sofas with mainstream fluff. . .Phillips's work is much more in line with masters like Jim Thompson and Charles Willeford, in that he is unafraid to tell the stories of gritty narcissists who turn dark corners and wind up blazing a savage trail through the world. . ..Donald Westlake's great Dortmunder novels come to mind as antecedents; Phillips, like Westlake, is fond of running gags and has the ability to transform the criminal underworld into a deliciously zany place. But Willeford's The Woman Chaser seems like Rake's closest relative. Phillips, delivering a study in misanthropic madness, takes all of his cues from Willeford, who — better than anyone — examined the troubled minds of the soulless." —William Boyle, Los Angeles Review of Books

"With Rake, Scott Phillips proves himself the unparalleled master of the noir anti–hero. Mad, bad, and dangerous to know, his Crandall Taylor is the quintessential American huckster on the scene, and in Phillip's sly, deft hands we find ourselves sinking down eagerly with him, glorying in the beautiful muck." —Megan Abbott

"Scott Phillips is an author whose books are always at the top of my reading pile. His smart prose and conscience–deprived anti–heroes turn crime fiction into social satire. His latest, Rake, further proves his talent for making noir funny. . .With Rake, Phillips has once again created a protagonist whose voice suits his writing style. You might dislike him, if he wasn't so cavalier and intelligent. While he gives us wild justification for his actions there exists a little hypocrisy in him, at least when he tells his tale. It's also hard to admit we'd behave differently if we could get away with it. One could say that Scott Phillips gives us a cold look at his characters, and the film business, but the narration and the protagonist's devil–may–care attitude give Rake a sleazy warmth. Rake is Scott Phillips at his most entertaining. His wonderfully amoral and hedonistic characters, with their scheming and trouble shooting, provide a subtle yet laughable loud look at how the U.S. has exported its worst traits abroad."— Mystery People

"The first scene in Rake is a fight. It's not surprising that a Scott Phillips book opens with violence; he's known for exploring the baser side of humanity with dark humor and noirish style. . .Rake makes no bones about its main character being a bad guy. But bad guys can make for good reads, and this one does." —The Wichita Eagle

"Rake is full of vicarious pleasures for us to indulge in...from one of the most original practitioners of noir working today..a hilarious Hollywood satire, the fuck–journal of a mad man and an ingeniously twisty old–school noir along the lines of James M. Cain." —Spinetingler Magazine