The Gunners: A Novel (Hardcover) 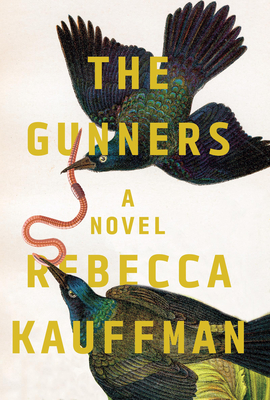 "Kauffman has done something remarkable with The Gunners . . . She's made spending time with [her characters] not just tolerable but delightful. And she's achieved this not by manufacturing likability, but by so convincingly rendering the affection between them that you accept each character's foibles as readily as they do one another's . . . There's so much generosity and spirit and humor shared by whatever characters are on the page at any given time that I was always happy to accompany them." —The New York Times Book Review

Following her wonderfully received first novel, Another Place You’ve Never Been, called “mesmerizing,” “powerful,” and “gorgeous,” by critics all over the country, Rebecca Kauffman returns with Mikey Callahan, a thirty–year–old who is suffering from the clouded vision of macular degeneration. He struggles to establish human connections—even his emotional life is a blur.

As the novel begins, he is reconnecting with “The Gunners,” his group of childhood friends, after one of their members has committed suicide. Sally had distanced herself from all of them before ending her life, and she died harboring secrets about the group and its individuals. Mikey especially needs to confront dark secrets about his own past and his father. How much of this darkness accounts for the emotional stupor Mikey is suffering from as he reaches his maturity? And can The Gunners, prompted by Sally’s death, find their way to a new day? The core of this adventure, made by Mikey, Alice, Lynn, Jimmy, and Sam, becomes a search for the core of truth, friendship, and forgiveness.

A quietly startling, beautiful book, The Gunners engages us with vividly unforgettable characters, and advances Rebecca Kauffman’s place as one of the most important young writers of her generation.

"A moving novel . . . Each character comes to terms with their dark past, and uncertain futures—like an intimate hangout session, dashed with suspense and few extra layers of emotional beauty. You'll find yourself thinking of Freaks and Geeks, The Big Chill, and maybe all those friends you've been meaning to text." —Entertainment Weekly, The Must List

Rebecca Kauffman is originally from rural northeastern Ohio. She received her BA in classical violin performance from the Manhattan School of Music, and several years later, Kauffman received her MFA in creative writing from NYU. She currently lives in the Shenandoah Valley of Virginia. She is the author of Another Place You've Never Been and The Gunners. Find more at rebeccakauffman.net.

"Kauffman has done something remarkable with The Gunners . . . She's made spending time with [her characters] not just tolerable but delightful. And she's achieved this not by manufacturing likability, but by so convincingly rendering the affection between them that you accept each character's foibles as readily as they do one another's . . . There's so much generosity and spirit and humor shared by whatever characters are on the page at any given time that I was always happy to accompany them." —The New York Times Book Review

"Unusually for a literary novelist, Kauffman has no fear of overt feeling. When she explores an emotion, she does it with absolute candor. Her characters announce their grief and affection and rage in a way that few others do . . . If it's rare for a contemporary literary novelist to address emotion so bluntly, it's even rarer if that novelist is female . . . The brilliance of The Gunners is that it helps you. Kauffman teaches you the right way to read her prose . . . Another thing literary novelists don't often let themselves do is write novels with morals, or messages, but The Gunners has one. It's clear, though not easy: Accept your emotions. Feel them bluntly, plainly. Allow yourself to flinch." —NPR Books

"A moving novel . . . Each character comes to terms with their dark past, and uncertain futures—like an intimate hangout session, dashed with suspense and few extra layers of emotional beauty. You'll find yourself thinking of Freaks and Geeks, The Big Chill, and maybe all those friends you've been meaning to text." —Entertainment Weekly, The Must List

"A riveting portrayal of the joys and mysteries of growing up, and of friendship itself." —People

"In the beautifully wrought The Gunners, life ends not with a whimper, but with a bang . . . This engrossing book's suspense lies not just in what will happen, but in what already has . . . Kauffman is interested in the muddiness of love—how it can be selfish and desperate, even cruel . . . When it comes to love, Kauffman suggests, we're equal parts predator and prey." —O, The Oprah Magazine, 1 of the Best Books to Read in April 2018

"This story examines how the secrets held and harbored by friends, and the defining relationships of childhood and adolescence, never fully leave us." —Esquire, 1 of the Best Books of 2018 (So Far)

"A vivid, layered novel . . . Endearing and intimate, Kauffman steers clear of veering into cliche, reviving a well–worn premise into something new and exciting." —Harper's Bazaar, 1 of 18 New Books You Need to Read in March

"Kauffman strikes immediate, crowd–pleasing gold with a flashback–laden plot that’s equal parts Stand By Me and The Big Chill. Her characters—male and female, straight and LGBTQ alike—are rendered with compassion and delicacy enlivened by the group setting. In coming–of–age scenes conjuring the romance and sadness of latchkey childhood, her spare, objective language never assumes a clinical tone. With its ensemble cast and weighty, sentimental subject matter, The Gunners is a feat in economy. Character backgrounds are executed in a matter of sentences rather than chapters; narrative intrigue is succinct and enduring . . . Kauffman’s precision in tackling the nature of love and fatality constitutes a major accomplishment for a young writer, and The Gunners packs a serious emotional punch in its pragmatic brevity." —Washington City Paper

"The thing about childhood friendship is that it is part of the DNA of your formation, something all the Gunners, but especially the narrator, knows too well. The Gunners is one of the most moving portraits of friendship I’ve read, perhaps ever." —Refinery29, 1 of the Best Books of 2018 We Can't Wait to Read This Year

"This gorgeous story of loss and friendship follows a group of childhood best friends when they reunite as adults to grapple with a friend’s suicide . . . Weaving back and forth through the past and present, this tender story explores the secrets we carry from the past." —Real Simple, 1 of the Best Books of 2018 (So Far)

"With The Gunners, Rebecca Kauffman enters the grand tradition of friendship novels by understanding that they are just another type of love story, full of as much pain and exhilaration as any classic romance." —NYLON, 1 of 10 Great Books to Read This March

"At the heart of this moving novel is the mystery of why a high–school girl suddenly turned away from her tight–knit group of friends . . . While Kauffman doesn’t tie everything up with a neat bow, that’s hardly the point. What really matters is what’s below the surface—a tale of friends who are driven together by circumstance and location but who become a family by choice." —The Daily Beast, One of the Best Summer Beach Reads of 2018

"Novels about friendships are the new fad but trust me when I tell you that this one is truly superlative. A gracefully endearing story which delves deeply into the nature of childhood friendship while also shining a light on chronic illness and LGTBQ rights." —Chicago Review of Books, The Most Anticipated Fiction Books of 2018

"Perceptive, funny, and endearing . . . Reminiscent of The Big Chill and St. Elmo’s Fire, this remarkable novel is just as satisfying and provides readers with an entire cast of characters who will feel like old friends upon finishing." —Publishers Weekly (starred review)

"Kauffman has created vivid and compelling characters struggling with what is in some ways the most universal dilemma: how to grow up. Mikey especially is mature and thoughtful but not at all precious; and the boisterous, hilarious Alice is charming despite her best efforts to behave otherwise. In fluid prose, Kauffman lays bare the lessons of youth and truth. A layered and loving bildungsroman of friendship." —Kirkus Reviews

"Neither dark nor despairing, this work admirably expresses the satisfying comfort derived from the survival of such long–term friendships even as it evokes sadness about the losses and challenges that come with transitioning to adulthood. A successful sophomore effort after Kauffman’s well–received first novel, Another Place You’ve Never Been." —Library Journal