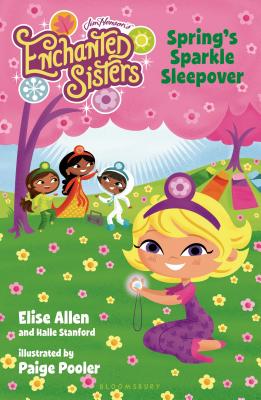 On the last night of her season, Winter hosts a sleepover party for her sisters—and the youngest Enchanted Sister, Spring, finally feels old enough to go! But Spring is nervous . . . she's never slept away from home before. The evening ends in disaster when a storm scares Spring into leaving the party early. But when Bluster Tempest steals Mother Nature's scepter and puts her under a sleeping spell, Spring must muster her courage to lead her sisters into the Barrens to get it back. Can Spring convince Bluster and his mischievous boys, the Weeds, to wake up Mother Nature and return the scepter before the Seasons Ceremony is ruined?

Elise Allen is author of Enid Blyton's Enchanted World series and the young adult novel Populazzi. She is also co-writer of Devoted and The New York Times Bestselling Elixir, by Hilary Duff. She lives in Los Angeles. www.eliseallen.com

Halle Stanford, an eight time Emmy-nominated children's television producer, is in charge of creating children's entertainment at The Jim Henson Company. She currently serves as the Executive Producer on the award winning series Sid the Science Kid, Dinosaur Train, Pajanimals, and Doozers. She lives in Los Angeles.

Paige Pooler is an artist whose illustrative work can be found in American Girl magazine, as well as the Liberty Porter, Trading Faces, and My Sister is a Vampire middle grade series. www.paigepooler.com

The Jim Henson Company is an established leader in family entertainment for over fifty years and is the creator of such Emmy-nominated hits as Sid the Science Kid, Dinosaur Train, Pajanimals, and Fraggle Rock. They are currently developing this series as an animated TV property.