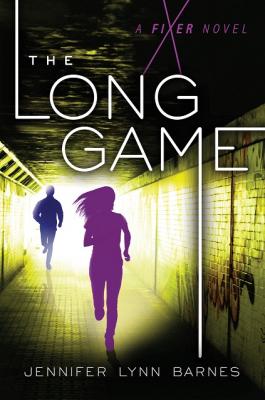 By Jennifer Lynn Barnes
Out of Print

For Tess Kendrick, a junior at the elite Hardwicke School in Washington D.C., fixing runs in the family. But Tess has another legacy, too, one that involves power and the making of political dynasties. When Tess is asked to run a classmate's campaign for student council, she agrees. But when the candidates are children of politicians, even a high school election can involve life-shattering secrets.

Meanwhile, Tess's guardian has also taken on an impossible case, as a terrorist attack calls into doubt who can--and cannot--be trusted on Capitol Hill. Tess knows better than most that power is currency in Washington, but she's about to discover first-hand that power always comes with a price.

Perfect for fans of Harlan Coben and Ally Carter, the second book in this thrilling series will leave readers breathless.

Jennifer Lynn Barnes has written more than a dozen young adult novels, including The Fixer, the Raised by Wolves series, and the Naturals series. She has advanced degrees in psychology, psychiatry, and cognitive science. She received her PhD from Yale University and is now a professor of psychology and writing.
www.jenniferlynnbarnes.com
@jenlynnbarnes

"Barnes is a master at orchestrating clues as well as surprises, and her heroine has a very satisfying knack for flattening both student and adult bullies. Movie-ready." - VOYA

"Espionage, politics, and high school combine in this fast-paced sequel to The Fixer . . . Revenge is just the starting move in this cat-and-mouse thriller." - Booklist

"Barnes paints a convincing behind-the-scenes picture of national politics, and the social scene in the Hardwicke School mirrors the power-play atmosphere . . . . [R]eaders will find plenty to enjoy with the interesting characters . . . Intriguing." - Kirkus Reviews on THE FIXER

"House of Cards meets Criminal Minds. . . . You won’t be able to put it down until the last page. . . . The sequel can’t come soon enough!" - Top Pick, RT Book Reviews on THE FIXER

"Imagine Shonda Rimes's Scandal plunked into the middle of an elite private high school in Washington, DC . . . Barnes packs all of that and more in this YA thriller." - School Library Journal on THE FIXER

"This book is riveting. . . Recommended for all public and high school libraries." - VOYA on THE FIXER

"A fast-paced, stand-alone sequel. . . . Barnes knows how to keep the reader hooked, and fans will be eagerly reaching for this title and clamoring for the next in the series." - Booklist on KILLER INSTINCT: BOOK TWO OF THE NATURALS

"The engaging plot moves at an even pace. . . and the murder mystery is compelling. . . . [D]evelopment of all the characters is furthered with revelations of their past." - School Library Journal on KILLER INSTINCT: BOOK TWO OF THE NATURALS

"A welcome addition to the teen-sleuth genre." - Kirkus Reviews on KILLER INSTINCT: BOOK TWO OF THE NATURALS

"In an intense CSI-type thriller . . . Barnes shows every card at just the right moment, catching readers off-guard at the final reveal. It’s a stay-up-late-to-finish kind of book, and it doesn’t disappoint." - Publishers Weekly on THE NATURALS

"[A] tightly paced suspense novel that will keep readers up until the wee hours to finish." - starred reivew, VOYA on THE NATURALS

"The Naturals is Criminal Minds for the YA world, and I loved every page." - Ally Carter, New York Times bestselling author, on THE NATURALS