People That Changed the Course of History: The Story of John F. Kennedy 100 Years After His Birth (Paperback) 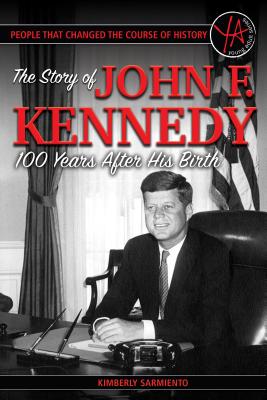 John F. Kennedy, the youngest man ever elected president, was born 100 years ago on May 29, 1917 in Brookline, Massachusetts. However, only two years into his term, Kennedy was assassinated, giving him the unfortunate distinction of also being the youngest president to die. Learn more about President Kennedy's life and his short, but impactful, time in office. Follow Kennedy on his path to the White House, from serving as a Democratic Congressman for the Boston area to narrowly defeating Richard Nixon in his bid to become the 35th president. During his time in office, JFK launched the Peace Corps and called for new civil rights legislation, which would eventually become the Civil Rights Act. He also faced a number of difficulties with foreign policy, due to the Cold War. The most notable of these challenges was the Cuban missile crisis. After his assassination by Lee Harvey Oswald, and Oswald's subsequent murder, a number of theories evolved surrounding Kennedy's death. Although a presidential commission concluded that Oswald alone was to blame for Kennedy's death, his assassination remains an event of much curiosity, even today. To celebrate the anniversary of his birth, take a closer look at the life of one of the most beloved presidents in American history. Our books include full color and black and white images, index, glossary, CIP, reading websites, bibliography, detailed table of contents, sidebars, historical timeline, historical context overview, Dewey number and reading levels by Lexile and F&P Leveled reading.

Atlantic Publishing is a small, independent publishing company based in Ocala, Florida. Founded over twenty years ago in the company president's garage, Atlantic Publishing has grown to become a renowned resource for non-fiction books. Today, over 450 titles are in print covering subjects such as small business, healthy living, management, finance, careers, and real estate. Atlantic Publishing prides itself on producing award winning, high-quality manuals that give readers up-to-date, pertinent information, real-world examples, and case studies with expert advice. Every book has resources, contact information, and web sites of the products or companies discussed."