Writing on the Wall: Social Media - The First 2,000 Years (Hardcover) 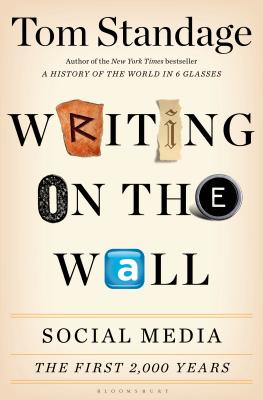 Papyrus rolls and Twitter have much in common, as each was their generation's signature means of “instant” communication. Indeed, as Tom Standage reveals in his scintillating new book, social media is anything but a new phenomenon.

From the papyrus letters that Roman statesmen used to exchange news across the Empire to the advent of hand-printed tracts of the Reformation to the pamphlets that spread propaganda during the American and French revolutions, Standage chronicles the increasingly sophisticated ways people shared information with each other, spontaneously and organically, down the centuries. With the rise of newspapers in the nineteenth century, then radio and television, “mass media” consolidated control of information in the hands of a few moguls. However, the Internet has brought information sharing full circle, and the spreading of news along social networks has reemerged in powerful new ways.

A fresh, provocative exploration of social media over two millennia, Writing on the Wall reminds us how modern behavior echoes that of prior centuries-the Catholic Church, for example, faced similar dilemmas in deciding whether or how to respond to Martin Luther's attacks in the early sixteenth century to those that large institutions confront today in responding to public criticism on the Internet. Invoking the likes of Thomas Paine and Vinton Cerf, co-inventor of the Internet, Standage explores themes that have long been debated: the tension between freedom of expression and censorship; whether social media trivializes, coarsens or enhances public discourse; and its role in spurring innovation, enabling self-promotion, and fomenting revolution. As engaging as it is visionary, Writing on the Wall draws on history to cast new light on today's social media and encourages debate and discussion about how we'll communicate in the future.

Tom Standage is digital editor at the Economist, overseeing the magazine's website, smartphone, tablet, and e-reader editions. He is also editor of the Technology Quarterly supplement, which covers emerging technology. Standage is the author of five books, including the New York Times bestseller A History of the World in 6 Glasses, An Edible History of Humanity, and The Victorian Internet, described by the Wall Street Journal as a “dot-com cult classic.” Standage is a regular commentator on BBC radio and has written for many other publications, including the New York Times and Wired. He lives in London with his wife and children. Visit his website at www.tomstandage.com.

“This book will change the way you think about social media. It reveals that today's techologies are helping us scratch a timeless itch to connect and share.” —Marc Andreessen, cofounder of Netscape, cofounder and general partner, Andreessen Horowitz.

“Tom Standage's gripping history shows that the era of mass media dominance that we grew up in was a two-century anomaly in the natural course of our culture. Media used to be social and is becoming even more so again.” —Chris Anderson, author of MAKERS: The New Industrial Revolution

“Tom Standage once again displays his ingenious gift for connecting our historical past to the debates and technologies of the present day. Writing on the Wall makes an entertaining and persuasive argument.” —Steven Johnson, author of FUTURE PREFECT and WHERE GOOD IDEAS COME FROM

“On the Internet we continue an old tradition of social media, pioneered in the Roman Republic. Writing on the Wall shows how we're retweeting the past at this very moment and inventing the future.” —Craig Newmark, founder of Craigslist

“A thoroughly fascinating look at the evolution of social media.” —Booklist