Infernal Geometry and the Left-Hand Path: The Magical System of the Nine Angles (Paperback) 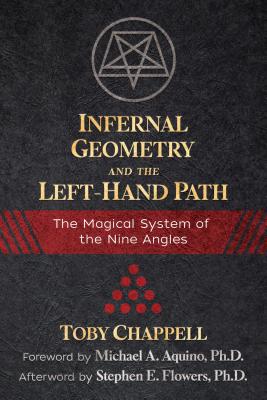 A comprehensive guide to the history and practice of Angular Magic

• Details the development of the magical system of the Nine Angles by the Church of Satan and the Temple of Set, as well as its internal body, the Order of the Trapezoid

• Analyzes the 3 key rites of Angular Magic: Die Elektrischen Vorspiele, the Ceremony of the Nine Angles, and the Call to Cthulhu

• Includes practical examples, daily practices, and guidance on creating your own rituals

Revealing the magical uses of number and geometry as tools for introspection, self-development, and creating change in both the inner and outer worlds, Toby Chappell explores the rites, history, and potent practices of Angular Magic and Infernal Geometry, the Left-Hand Path of Sacred Geometry.

Focusing on the advanced magical system of the Nine Angles, he details the system’s development by the early Church of Satan and later the Temple of Set, as well as its internal body, the Order of the Trapezoid. He shows how the system first emerged in the Ceremony of the Nine Angles, written by Michael Aquino and published in Anton Szandor LaVey’s The Satanic Rituals. He explores historical influences on Angular Magic, including Pythagorean number mysticism, John Dee’s Enochian magic, the theories of William Mortensen, and, most importantly, the writings of H. P. Lovecraft as well as other contributors to his Cthulhu mythos.

The author analyzes the 3 key rites of Angular Magic: Die Elektrischen Vorspiele, the Ceremony of the Nine Angles, and the Call to Cthulhu, expanding upon them to demonstrate how readers can craft their own rituals. He examines the Nine Angles individually, detailing their keywords, powers, and related deities, and explains how each can be used in magical practices and as part of an ongoing initiatory process. He offers practical examples, including use of Angular Magic in divination, sigils, and magical symbols, and guidance on creating your own practices--a core component of the ever-evolving Left-Hand Path.

Offering a self-directed path of magic and empowerment, previously unavailable to those outside the Temple of Set, Chappell shows how the Nine Angles must be worked with and experienced personally in order to effect true transformation and change.

Toby Chappell is a musician, writer and lecturer on Left-Hand Path topics. A member of the Temple of Set since 2000, he has served since 2015 as the Grand Master of the Order of the Trapezoid within the Temple. He lives in Atlanta, Georgia.

Stephen Flowers studied Germanic and Celtic philology and religious history at the University of Texas at Austin and in Goettingen, West Germany. He received his Ph.D. in 1984 in Germanic Languages and Medieval Studies with a dissertation entitled Runes and Magic.

“Toby Chappell has revealed a pragmatic, powerful, and magical secret of the Western Left-Hand Path, according to a strict and hidden calendar. Great forces are made available for the talented and daring magician who uses this book. Greater forces still are unleashed upon the sleeping world with its publication. At times the face of the serpent is seen among men. This is such a time. This erudite and practical book is such a veil render. This is literally a moment when Western magic will be changed forever.”
— Don Webb, author of Overthrowing the Old Gods and coauthor of Set: The Outsider

“Our existence is built out of 11 dimensions, as Benoît B. Mandelbrot (1924-2010) has shown, but humankind is only aware of 4--space (3D) and time (4D). The research of Mandelbrot was paradigm-shifting and gave birth to chaos mathematics and the fractal theories. To most people interested in these fields, it stays as a theory, but for the true magician it is a call that there are 7 dimensions unexplored. These unexplored dimensions are dealt with in H. P. Lovecraft’s horror fiction, which echoes a genuine description of the worlds beyond the Newtonian laws of physics--dark unknown worlds that Toby Chappell, the author of Infernal Geometry and the Left-Hand Path, gives us access to through a system developed by the Church of Satan and the Temple of Set but that has a history that goes back in time to the mystery cults of ancient days.”
— Thomas Karlsson, Ph.D., author of Nightside of the Runes: Uthark, Adulruna,, and The Gothic Cabbala,

"I recommend Infernal Geometry and the Left-Hand Path: The Magical System of the Nine Angles to those interested in infernal or sacred geometry and have been on the left-hand path for some time. It is not a beginner’s book and the reader should have some prior knowledge of the occult and magick before performing any of the rituals. It can also be used as a scholarly book, for those who don’t want to perform the rituals, but want to learn about the subject matter."
— Marie RavenSoul, Spiral Nature