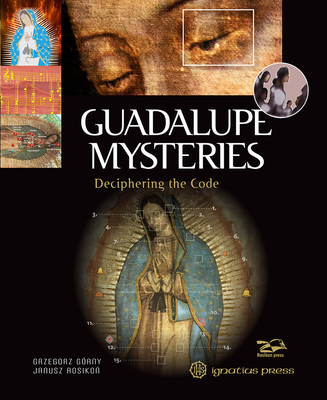 By Grzegorz Gorny, Janusz Rosikon (By (photographer))
$34.95
Out of Stock; Usually Arrives in 5-7 Days

Our Lady of Guadalupe is the most beloved symbol of Mexican Catholicism, and devotion to her is widespread in the USA. While she has entranced and encouraged Mexican Catholics for several centuries, believers and even nonbelievers the world over are inspired and intrigued by her. Millions of pilgrims visit her shrine in Mexico City every year. Both Pope John Paul II and Pope Francis have travelled there to pray for her motherly intercession. And scientists from many disciplines have studied the amazing attributes of her mysterious image.

In this glorious, lavishly illustrated book, the renowned author-photographer team Grzegorz Górny and Janusz Rosikon take the reader on an illustrated pilgrimage to Our Lady of Guadalupe. They tell the amazing story of her apparition to Juan Diego in 1531 and its dramatic impact upon the destiny of an entire people. They interview the various experts on the image and reveal its symbolic messages, those of the past and those speaking to us today.

Grzegorz Gorny is a reporter, essayist, and film and television producer. He is the founder and editor-in-chief of the quarterly Fronda, and from 1994 to 2001 he co-authored a program under the same title that aired on the Polish national television. He has produced various documentary television series and authored numerous articles for European publications. His books include Battle for Madrid (2010). Janusz Rosikon is a photographer and a member of the Polish Journalists' Association and the Association of Polish Artistic Photographers. His photographs have been featured in Time, Newsweek, and Reader's Digest and various European publications. His work has been exhibited in public galleries in Poland, England, Austria, and North America.